Flying into the Future 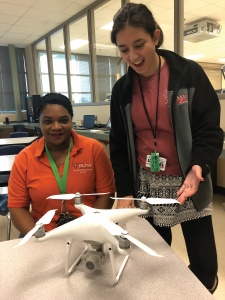 Starting this month, drivers passing the parking lot in front of the Mansfield ISD Center for Performing Arts can see the Edudrone class, drones buzzing overhead and teams of teens below flying them.

“I think the job of a facility like this is to give students skills in a job they’re passionate about,” says Catherine Hudgins, the school’s principal. “The drone industry is booming. The more tools in their toolboxes we can give them, the better.”

Superintendent Jim Vaszauskas came up with the idea for a drone class at the career academy after seeing one at another school, says engineering teacher Beverly VerSteeg.

“My daughter and I have a little cheap one,” VerSteeg says. “They came to me at the end of the last school year and said ‘We need you to get licensed and go through TSA screening.’”

VerSteeg is licensed and ready to teach two classes of Edudrone this semester. Since she recently got her own certification, she knows exactly what she needs to teach.

“At the end of the class, they should be able to fly effectively and have their drone certification,” she said. “That’s our goal. I want them to understand this is not just a toy, it’s a tool and you have to be safe. There’s a lot of rules and regulations. The maximum height we can go is 500 feet. We have to have air traffic control permission to go higher.”

VerSteeg also plans to teach the students how to maintain the $1,700 Phantom DJI4Pro drones, which are a lot more advanced than those most of the students have flown.

“This one will give you great aerial shots,” she says. “It has a camera and you can program it to fly on its own.”

To participate in the class, students have to be at least 16 and have their driver’s license, VerSteeg notes.

“Once they get in class, I’m going to get them registered with the FAA, so at the end of class they can go take their test (to get certified),” she says.

The educators point out that the certification will let the students work in an ever-widening variety of jobs.

Realtors use them to take photos of property and homes, as do insurance agents, she says.

“A lot of students can go out and start their own business,” VerSteeg says. “When they are 21 or older, they can go to work for the police or fire department. A lot of my kids are going to the military, and this is what they want to do.”

Isabella Estes, a junior at Legacy High School, plans to take the class next year.

“Stuff like the drone classes, they’re giving you exposure to the future and what you can innovate with,” Estes says. “It’s a transition from school to a career.”

Matt Schnuck, also a Legacy junior, sees it as a fun way to learn.

“It could open more opportunities for jobs in the future,” he says. “I just hope I don’t break one.”

Hudgins also sees the class as an amazing opportunity for the teens.

“Even if you don’t want to do this as a profession, what a great job to have in college or as a hobby,” she says. “Kids are out-of-the-box thinkers. They are going to have ideas that we wouldn’t have. The fact that they get a certification, it just doesn’t get any better.”