by ArlingtonToday Magazine
in Featured, People
0 0
0

While a Lamar High School student, Sue Alice Sauthoff was encouraged to apply for a scholarship she knew little about other than its namesake. Richard Greene had been mayor of Arlington for nearly as long as she could remember.

Sauthoff knew she wanted to devote her future to serving others through community development, she says, which was a key purpose of the internship that accompanied the $10,000 scholarship.

“I was considering a career in public service or international relief, which was a good fit for the program,” she says. “I also was very teachable and hungry for the opportunity to learn from community leaders and mentors with a wealth of knowledge and experience.”

There wasn’t an abundance of internships available for high schoolers 20 years ago, Sauthoff recalls, adding that she felt fairly confident until walking into a top-floor executive boardroom for an interview where about a dozen people sat, including Richard and Sylvia Greene, Tom Schieffer, then president of the Texas Rangers baseball team, Arlington’s city manager, the head of the Chamber of Commerce and others.

Sauthoff has interviewed many times since then, but she says because of that single, “amazing experience,” she’s never felt intimidated again.

These days, she lives in Boone, N.C., with her husband of 16 years, Matt, and their two daughters. She works for an international relief organization called Samaritan’s Purse with Operation Christmas Child, which mobilizes volunteers across the United States to fill shoe boxes with things to help build up communities and that go hand-in-hand with larger relief efforts.

“I lead a team that develops all the training and does the leadership and development for our volunteer base of about 10,000 people,” she says.

Sauthoff recalls that as a first-year Richard Greene scholarship recipient, she had rotated between several City locations including River Legacy, the Chamber of Commerce, Mission Arlington and the Arlington Independent School District. The final six weeks of year was spent with Greene and Schieffer at the ballpark learning lessons in leadership. The entire experience opened her eyes to future career paths, allowed her to see the inner workings of government and nongovernmental organizations that serve the community, and taught her “how to lead with heart and integrity but with clear strategy for accomplishing the organizations goals.”

“Being part of the program really opened my eyes to the impact that one person can make on their community,” she says.

Ryan Stewart, another first-year Greene scholarship recipient, describes the opportunity to get to work side-by-side with various city leaders as “a dream come true for a high school student.” 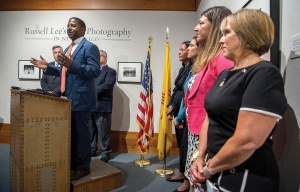 Stewart, who attended Martin High School, says the scholarship was competitive with a strong group of applicants who were equally smart and deserving.

Stewart went on to attend Stanford and now serves as the Secretary of Education for the state of New Mexico. He and his wife, Gretchen, have been married for 11 years and have a 9-year-old son, Miles.

An important takeaway from the scholarship, Stewart says, was that the opportunity enabled him to forge friendships with other scholars, as well as the Greenes, Schieffer and people like Arlington’s current mayor, Jeff Williams, who has also been his mentor.

“The fact that they’ve sustained [the scholarship] for this long and changed the lives of so many Arlington students  is just such a testament for the vision they have for the city and their continued support of building future leaders,” he says.

Stewart and Sauthoff both try to return to Arlington with their families a few times each year.

”We go to the Texas Rangers games and get to do all the fun things I got to do as a kid,” Stewart says.