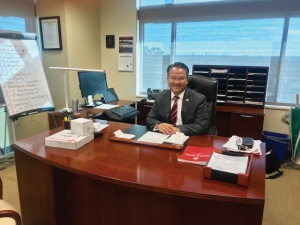 Andy Nguyen regularly tackles government and social issues like health care, transportation, education, justice, public safety and economic development.
“Those are the challenges that I have to keep up with as a county commissioner,” he says, adding that his goal for 2018 is to come up with solutions to face the multiple challenges that Tarrant County anticipates. “Traffic is already bad,” he says. “Imagine adding another million people.”
Nguyen, 51, points out that Tarrant County’s indigent and senior populations are growing, as well. Sitting in his Tarrant county sub-courthouse office on Abram Street, he says his priorities include improving mobility, developing a comprehensive strategy for JPS Health Network to deal with healthcare challenges over the long run, and effectively managing county finances to deal with future challenges without raising taxes.
That may sound daunting, but Nguyen is no stranger to struggle. He came to the United States as a 14-year-old with his father and four of his siblings after escaping Vietnam. It was Aug. 26, 1981, after the Vietnam War, and communists had taken over South Vietnam.
“They implemented communism and socialism,” Nguyen recalls. “Part of the policy was to nationalize private property ownership. So they seized my parents’ home and all the property my family owned at the time.”
The new rule essentially arrested all those deemed a threat to the new state, Nguyen says, which had included his father, a bank president.
“To the communists, educated people were a threat,” he says. “So they arrested my father and sent him to hard labor camp. Because of persecution, we had to escape from our homeland. That’s the reason we escaped from Vietnam via the boat, a fishing boat.”
Two of Nguyen’s brothers had escaped earlier in 1979. “They were on the Pacific Ocean for 30 days with scarce food and water,” he says.
The two were rescued, taken to refugee camp in Thailand then eventually sent to Kentucky. When Nguyen, his father and four siblings escaped in 1981, they went to a refugee camp in Malaysia, before being sponsored by his first two brothers, gaining political asylum and coming to the United States.
“It was very difficult because everything here was totally strange to us,” he says. “We had to learn a new language, a new culture. The way of life is very different here. We had to basically finish high school while learning English.”
Nguyen says the one subject he and his siblings excelled in was mathematics, which helped him measure something significant: the span between the last time he had seen his mother and youngest brother (1981) and the moment they would reunite in 1992. “They came via airplane,” Nguyen says, smiling broadly.
Nguyen graduated from the University of Kentucky, where he had enrolled in the ROTC program. Upon graduation, he was commissioned as a second lieutenant and sent to Lawton, Okla. Because his family had moved to Fort Worth, he traveled back and forth between the two cities.
“The natural course for me was to move to Texas,” he says.
Nguyen, who has served as Tarrant County Commissioner for seven years, says he plans to seek reelection for a third term. He and his wife, Julie Vu, live in Arlington. They have three children and have owned a small business for 17 years.
Nguyen says he enjoys drinking coffee with Julie Vu, eating French vanilla ice cream and watching movies with his children during his spare time. He also loves to talk church and politics with his siblings and to read a good John Maxwell book.
“The key ingredient for my success is the desire to lead and the desire to serve,” he says. “It comes from who I am as a person, maybe. I have an authentic desire to serve, and to lead, and to solve complex problems. I enjoy doing those things.”