Giving it the NEW college try 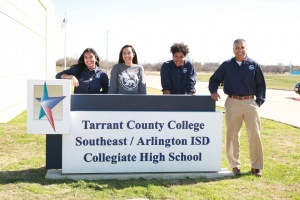 This cart-before-horse scenario is because they are seniors at Arlington Collegiate High School, an educational innovation where students enter as ninth-graders and, four years later, emerge with both their high school diplomas and college associate degrees.

The early college high school concept was pioneered by the Bill and Melinda Gates Foundation in 2002, adopted by the Texas Education Agency in 2003 and now boasts 198 campuses in Texas, eight of them in Tarrant County under agreements with Tarrant County College. ACHS is housed at TCC’s Southeast Campus.

Thus it is that Lugo and Urbina will have two graduation ceremonies in May. The one from ACHS is the first in the school’s history, and that makes the principal, Dr. Ben Bholan, both sad and proud. “As our first students, they had it the toughest,” says Bholan. “They didn’t know what was going to happen, and we, as adults, were trying to figure out things as we went along. But they overachieved our expectations.”

The grads-to-be were both sold on the idea in eighth grade by teachers at their respective junior highs – Lugo by Karen Attaway at Workman, Urbina by Nancy Rushing at Ferguson. “Ms. Rushing kept telling me about this new school,” Urbina says, “how it wasn’t even built yet but would be such a good opportunity for me and that I’d be perfect for it.”

A good opportunity, indeed – top-flight high school education, first two years of college at the same time and all at no cost. The school district and TCC combine to foot the bill.

So what’s not to like? For one thing, students come to ACHS from throughout AISD and consequently leave behind many or all of their friends who go on to traditional high schools. They also miss out on the usual high school experience – football, pep rallies, choir, band. Lugo wasn’t much into those things, but she would miss the daily contact with friends. “But my mom told me, ‘Hey, friends come and go. The ones who are meant to be in your life will stay.’”

For Brinley Dorsey, currently a freshman, ACHS was much more a known quantity. His sister, Arianna, had enrolled there the previous year, and he needed no coaxing. He was leaving some friends, sure, but he says, “I was thinking more of my future, and this was the best thing for me.”

The toughest part was completing the application form. “I filled it out many, many, many times because I wanted to make sure it was perfect.”

Dorsey’s quest for perfection is typical of ACHS students, who teachers say are, as a group, highly motivated. Lugo, for instance, wasn’t satisfied with a high C in psychology because “it didn’t look good,” and is retaking it.

A summer bridge program prior to the freshmen year provides information on what to expect and a chance to make new friends. Still, says English teacher Jennifer Fuller, “They come in scared to death. Not only are they leaving their comfort zone, but they’re also afraid they may disappoint people.”

Students are told right off that the easy road they may have had in junior high has taken a sharp turn. “The first day of class, every teacher told us the same thing,” Lugo recalls. “It got into my head – this is hard, this is hard, I need to get my stuff together.”

Faculty and staff are careful, however, not to simply throw the students into the deep end. They start off with mostly high school classes and are eased into the college curriculum. By the junior year, they’re taking classes alongside regular TCC students. “Like from the kids’ table to the adult table,” Lugo says.

“That first semester is tough,” Bholan says. “They were in a tight schedule. Now, they may have a gap between classes and need to make the most of that time. Also, the TCC professors aren’t on them all the time saying things like, ‘You’ve got to turn this in.’ It’s a quick maturing curve they have to go through.”

Most juniors take that curve smoothly, having been prepped by the high school staff on what’s expected of them. TCC English instructor Melody Fowler had not been told who in her classes were ACHS students, but it soon became apparent. “They stood out because they’re so prepared,” she says. “They were always there, sitting at the front, always the first go get out their homework and the first to raise their hands. They go above and beyond anything that is asked of them.”

The ACHS students’ behavior in class is largely impeccable. They don’t want to act like children in front of their adult classmates. “That’s a big ‘NO,’” Urbina says. “We’re focused on our future and are here to learn.”

Fowler’s students try to avoid anything – bad behavior, low grades – that will reflect poorly on each other and on ACHS – especially on Bholan. She tells of one student who received a traffic ticket. “Her biggest fear was not telling her parents,” she says. “It was that Dr. Bholan would find out and be disappointed in her. He gets involved, and they absolutely adore him.”

The motivation, preparedness and hard work are reflected in excellent grades and in standardized test scores appreciably higher than the district average. Bholan is aware that some people think such achievement is natural because his school has all the smart, advanced placement students. Actually, that’s far from true. In fact, the state mandates that preference be given to students who are the first in their families to attend college and who, due to finances and other factors, are considered unlikely to attend college.

“These are average kids, but they have the will, the heart and the belief in themselves to achieve these things,” Bholan says. “Many of them, if they weren’t here, they would probably have dropped out.”

Prom and graduation may be just around the corner, but Lugo and Urbina are looking much farther ahead. Urbina will attend UTA as a junior with an eye toward dental school. Lugo also wants a dental career and already has a leg up, having been accepted by the highly competitive undergraduate/dental school program offered by Texas A&M and Baylor School of Dentistry in Dallas.

Dorsey’s plans aren’t that definite, but he wants a career involving scientific or technological research. “I want to be the person who, for instance, discovers a cure for cancer,” he says. Don’t bet against it. He recently ranked in the top five of about 100 students in a math/science competition sponsored by the Texas Association of Minorities in Engineering.

Graduation will be bittersweet for Bholan and Fuller as they watch their fledglings leave the nest, and their students also find themselves wistful. “We’ve been so close and been through so much together for four years,” Urbina says. “Now, everyone will be spread across the state and even across the nation.”

But it’s time to move on, well prepared, to what lies ahead. “This school has changed me. It’s changed who I am, how I think,” Lugo says. “This was the best decision I ever made.”