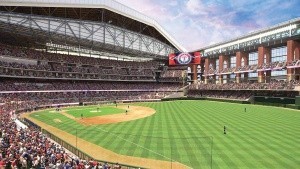 The radio ad gets me every time. The sultry voice, the perfect music, the wind-in-your hair sound effects. It goes something like this, “The new 2020 model is here, with its roomier seats and state-of-the-art electronics – and, best of all, it is a convertible.” I picture myself, top down, on a winding road in the hill country headed toward my favorite swimming hole, with a cooler full of beer in the trunk. Then the announcer says, “Oh you thought this was a car ad? We are talking about the new Globe Life Field.”

Amazingly we are all getting a new convertible this season. Globe Life Field opens later this month. I have had the chance to make periodic visits to the park over the past 29 months during construction. Maybe it was the hard hat, neon orange vest and safety glasses that I was required to wear during each visit, but I could not envision baseball being played in this hole in the ground. In fact, I was having trouble seeing it until the park was 85-percent complete. Once the seats started being placed inside you could see it. This place is going to be awesome!

The first thing you will notice when entering the park is how small it feels. The truth is, there are about 9,000 fewer seats in this stadium than at Globe Life Park. But that alone does not account for the intimate feel. The design is different. Stadiums that were built in the ‘90s were built out, this one has been built up. So if you have ever had the pleasure of visiting Fenway park, or if you remember the intimacy of old Tiger Stadium, that is what they have replicated here with the trajectory of the seats.

The next thing you will notice is that as you walk along the concourse you can see the field. One of the few things I did not like about Globe Life Park was that you could not see the action when you roamed around the park unless you were in the outfield. Here you can. Even if you are waiting in line for a hot dog you will be engaged with the game.

As you walk back to your seat with your hot dog or boomstick you will notice that the areas you are walking in don’t look like a typical stadium. Some of the concrete is painted, some is treated; in other places you will notice tile underfoot. All of it conspires to offer you a feeling that you are in a nice mall or a fine hotel – not a baseball stadium. AT&T Stadium just down the block has the same feel. It may be hard to notice when there are 90,000 people there. But if you have gone to a private event there or taken a tour you may have noticed the upscale feel to the place. Both stadiums had the same construction manager, Jack Hill, who is a master of stadia.

Of course, the most dramatic change is the roof! It allows for air conditioning and even heat if needed in April or October. It is there because of the A/C. Fans are going to love it. I have already experienced the benefits of the roof. On the day of the last game at Globe Life Park the temperatures were in the mid 90s. Because it was an important broadcast the Fox Bosses wanted all of us in suits. I was roaming around the old ballpark all morning and afternoon, and I was sweating! As the MC of the ceremony to place home plate in the new stadium I arrived there sometime in the eighth inning and joked I may have to host the ceremony shirtless because I was so wet with sweat.

The area where we were working was already air conditioned, and the roof was open and resting on its home on the west side of the stadium. As such, it was blocking the sun. I was in the shade and feeling the A/C from one of the concourses. So I put my suit coat on to cover my sweaty shirt and did not even feel hot. The roof works! The A/C works! Fans are going to love coming to baseball games in the summer.

Back to the radio ad, I always feel a bit silly when they remind me that they are not talking about a car. But I have a feeling that each time I go to the Globe Life Field, I am going to have that feeling; top down, driving to one of my favorite places in the world.