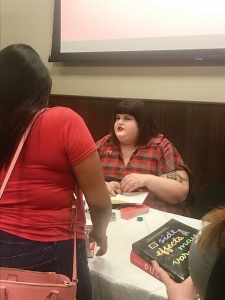 Fans who lined up to get an autographed copy of Arlington resident Julie Murphy’s latest book, “Puddin,’” were in for a treat at its launch party. The mostly young adult crowd that packed South Irving Public Library on May 7 was welcomed with themed pillowcases for sleepovers, nail embellishments and pudding cups.

“Puddin’” is a companion to Murphy’s earlier book, “Dumplin,’” a New York Times best seller whose film adaption includes Jennifer Aniston.
Aniston plays the main character’s mother, Murphy wrote in an email, adding that all of her books are entirely fictional.

The film rights to “Dumplin’” were originally purchased by Disney, which had hired people to write the screenplay and produce the movie, Murphy says. After Disney decided not to make the film, people dedicated to the project moved forward with it independently.

“We’re currently looking for a distributor,” Murphy says. “Hopefully, we’ll have it in theaters this fall.”

Emily Davis, a 16-year-old homeschooler, who says she reads about 100 books a year, waited in line at the launch party to meet Murphy and get her copy of “Puddin’” signed. Davis had read “Dumplin,’” she says, and was excited that Murphy had written another book. She explains how she had always felt different from her friends because she was not quite as thin, and Dumplin,’ “with all her imperfections,” was really the first character she could relate to in her age group.

“I wrote this book because I never really saw reflections of myself or my experience in fiction,” Murphy says. “And I knew I couldn’t be, there was no way I could be, alone in that.”

Murphy says the first time she ever thought of herself as ugly was when her mom had called herself fat in front of her.

“I thought my mother was the most beautiful woman in the world, and I still do,” she says. “I remember thinking, if my mom thinks she’s fat and ugly, then what does that make me?”

Murphy says it’s rewarding when mothers tell her that her writing has made them reconsider the way they talk about their own bodies and how they discuss their children’s bodies with them. “That just tells me that we’re going to do better and better with the next generation,” she says.

Murphy also shares how she became a published author. While attending Texas Wesleyan University, studying political science and contemplating a career in law or library, she was overwhelmed by the denseness of the content of her studies, she says, and found herself reading young adult novels. Later, while working at Lancaster Public Library, she became involved in National Novel Writing Month, which encourages authors of all ages to pen 50,000 words in a month.

Murphy did and created “Side Effects May Vary,” which became her first novel. “Once I found an agent,” she says, “it was like dominoes falling into place.”

Murphy says she feels fortunate and happy as an author but wants to keep getting better at writing. “The best, and kind of the worst, thing is that we’re never satisfied,” she says.

Murphy can’t say that all of her dreams have come true yet, but writing has given her the chance to communicate with people across the world that she never would have met otherwise.

Originally from Connecticut, Murphy and her husband have made Arlington their home for the past decade.