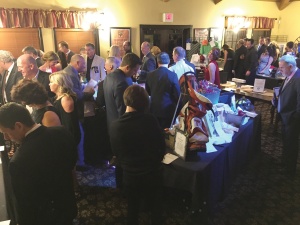 Known as the biggest party in south Tarrant County, the Mansfield Cares Charity Ball will reign Feb. 23 at Walnut Creek Country Club with a Prince-inspired celebration. Ten-piece band The Good Question will get the party going with hits from 1999, Motown and line dances that will get people dancing, Gallini says.

She promises heavy hors d’oeuvres, which include a prime rib carving station, seafood bar and chocolate-dipped strawberries, among other delectable dishes.

And there will be a lot to do besides dining and dancing. Live and silent auctions, including a restaurant row of gift cards, split the pot and a wine pull are planned.

Besides the Purple Rain décor and a purple signature drink, the party will honor two decades of assistance to the community. In the past 20 years, Mansfield Cares has donated approximately $2.5 million to the Mansfield area, estimates Suzy Herrmann, president of the 501(c)3 organization.

“We’re known as the safety net of Mansfield,” says Herrmann, who has been a member of the all-volunteer group for 14 years. “If people can’t find help, we will come in and help.

“Mansfield is so unique,” she says. “It takes care of its citizens. We see a need, and we take care of that need.”

Inspired by the Margarita Ball in Arlington, a group of Mansfield residents got together in the fall of 1999 and came up with the idea of doing something similar in their community. In the past 20 years, the ball has switched seasons – from November to February – and the purpose of Mansfield Cares has become much broader.

Besides assisting people in need – “someone loses their job and can’t pay the mortgage” – the group also assists other charities in the community, Herrmann says.

Mansfield Cares donates to Feed the Kids and local food pantries, gives Payless shoe cards to the Mansfield school district and scholarships to graduating seniors. In 2009, the group built The Caring Place Clinic, which provides medical, dental, vision and counseling care to those in need. And in 2013, Mansfield Cares built a 15,000-square-foot warehouse that now houses the community’s only food bank.

Ball decorations will incorporate the high points of those 20 years of giving, Gallini explains. “As you enter, you’ll go through a display that showcases what Mansfield Cares has done over the past 20 years,” she says. “New people don’t know who we are and what we’re about.

“It’s for a great cause,” Gallini says. “You get people with charitable hearts. I love what it’s been able to do for people in our community.”

Tickets for the ball are $125 per person or $150 each at the door. Go to mansfieldcares.org to order tickets. Everyone is invited, Herrmann says.