He was on a mission of mercy 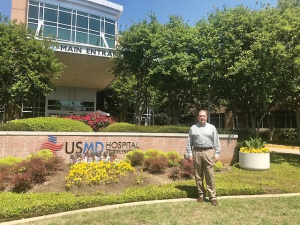 Before retiring, Dr. Pat Hezmall had been treating patients in Arlington for nearly 20 years. But he’s a rookie when it comes to practicing medicine in the wilds. A cofounder of Urology Associates of North Texas and previous part-owner of USMD, Hezmall went on his first medical mission trip this year with Restore Hope, a nonprofit backed by the First Baptist Church of Arlington.
A surgeon, Hezmall specialized in urology, which deals with the urinary system, kidneys, bladder and mainly male genital area. “Urology had a wide spectrum,” he says. “I took care of all ages from elderly to infants, men and women.”
There was a lot to deal with, from congenital defects in pediatrics to kidney stones and infertility among middle-aged patients. Older individuals might have bladder, kidney or prostate cancer. He says there were also incontinence and other urinary problems.
During the latter years of Hezmall’s practice, he focused more on prostate issues. And at one point, he was involved in more than 20 research projects.
Hezmall says he saw the mission trip as a chance to visit and medically evaluate orphans like those he and his wife, Jennifer, sponsor, as well as others in Sierra Leone. He explains that many of Sierra Leone’s orphans are Ebola victims, either having had the disease or whose entire family had died from it.
“There were 12 of us that went,” he says. “And we also went into what they call the bush, which is the jungle.”
The group included two doctors, three nurses and a physician assistant, as well as a few teachers and other professionals. Each had paid their own way and brought 50 pounds of medicine. When local people heard they were coming, some hiked for two days to get to see them.
“A lot of them didn’t have a lot going on,” Hezmall says. “They were just hungry.”
“We slept in a tent out in a field,” he continues. “They had a church that had a dirt floor.”
With the help of an interpreter, the group saw 500 people during their two days in the bush, Hezmall says. Other days, they were seeing the working staff at The Hope Center and two orphanages. The trip had lasted eight days.
“I saw one case of leprosy,” Hezmall says. “You don’t see that here [in the United States].”
Medicine was practically nonexistent there, and the people foraged for food, eating only one meal a day. Hezmall says that in some remote areas of Africa child sacrifices are, presumably, still made. Hezmall met a man who, in the 1980s, as a 5-year-old, was scheduled to be sacrificed, but his 10-year-old sister stole him during the dark of night.
“She grabbed him and said, ‘we’re out of here,’” Hezmall recalls, adding that the children had walked for two days with the villagers after them before being rescued. The man, who later became a Christian, returned. Now, most of the villagers are also Christians.
Another man had been shot while riding a bicycle into a village to spread the gospel.
“They just didn’t want to hear it,” Hezmall says. “His backpack, Bible and booklets that he was going to hand out stopped the bullet.”
After word got out about the medical mission, the same village sent a few women over to check things out.
”We treated them just like we would anybody else,” Hezmall says. “Then the chief came and said, ‘listen, we want to hear about this Christ.’ That was really a very rewarding part of the trip.”
Although it was Hezmall’s first mission, he said Dr. Joe Nawrocki, an emergency room physician behind the local nonprofit Rocks Medical Outreach, has been going on medical missions for years.
“There are a lot of doctors, dentists, orthopedic and plastic surgeons that all go on missions and donate time when they can,” he says. “And it’s not just these exotic missions overseas.”
Many, Hezmall says, donate their time regularly here at Mission Arlington.