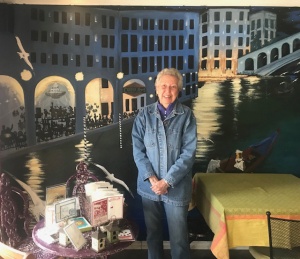 Some people have a song in their hearts. Velma Bogart recently discovered that she has an entire choir in hers. After receiving an SOS email from Elva Roy, founder of Ambassadors for Aging, Bogart, 85, decided to create a special singing ensemble in Arlington that is literally changing lives.
“[Roy] independently started a group that was paying attention to older people,” Bogart says. “Arlington needs that.”
Bogart explains how Roy had watched a Minneapolis choir online that was helping people with Alzheimer’s disease recall memory through music, and the idea came about to do the same in North Texas. The video was compelling, so much so that Bogart formed Musical Memory Singers, a group made up of Alzheimer’s patients and their care partners.
The group meets on Thursdays at the Pantego Lion’s Club to sing old, familiar tunes like “Deep in the Heart of Texas” and “Bicycle Built for Two.”
“Those words come right back to them,” Bogart says. “And they smile. It doesn’t look like anybody is ailing or having trouble being there.”
Bogart had noticed that, when talking with a group of 20 to 30 people, nearly all hands go up when the people are asked if they know someone with Alzheimer’s. She says Musical Memory Singers focuses on those in the mild to intermediate stages of dementia, and most participants live at home with caregivers.
“At first, it’s hard to recognize who has Alzheimer’s,” she says. “They didn’t used to know what it was. They called it old age.”
Bogart believes her dad probably had dementia of some sort. ”He was a musician,” she says. “He would have benefited going with a care partner and listening to songs.”
MMS has about 35 singers, and Bogart says people do not need to join the group – “just show up” – and everyone is welcome. The group has had invitations to sing at other locations but prefers to sing at the Lion’s Club. “It’s not a group we take someplace,” she says. “I have learned so much about dementia. The main thing is they like familiarity.”
Since July, the volunteer group has acquired a board of directors, secured a venue, recruited a pianist and started a Facebook page, among other things. An electric piano has been donated, and MMS will soon have a website, as well. In addition, Bogart sends out a weekly newsletter letting people know what’s coming up or if a rehearsal has been canceled.
Bogart says UTA students have also attended sessions for extra credit. “The intergenerational effect of having the UTA students there was tremendous,” she says. “The kids have been wonderful.”
Bogart moved to Arlington in the 1970s and has taught music both publically and privately. Her parents were both musicians. She also has sung in choirs and still plays occasionally with the Arlington Community Band and Mansfield Wind Symphony.
Her goal for 2018 is to keep MMS’ board members energized. “They’ve jumped right in and said yes to most everything I’ve suggested,” she says. “The board members have been tremendous. Each one has come with a talent or skill.”
Bogart said MMS is currently looking for a backup director, and once the group is moving along good, she plans to step down so she can practice her flute and play with her grandchildren and great grandchild. “I need to do this one last thing,” she says. “There are so many people that need this to have an hour of fun and singing and spiritual uplifting.”
For more: Email vlbogart@flash.net.