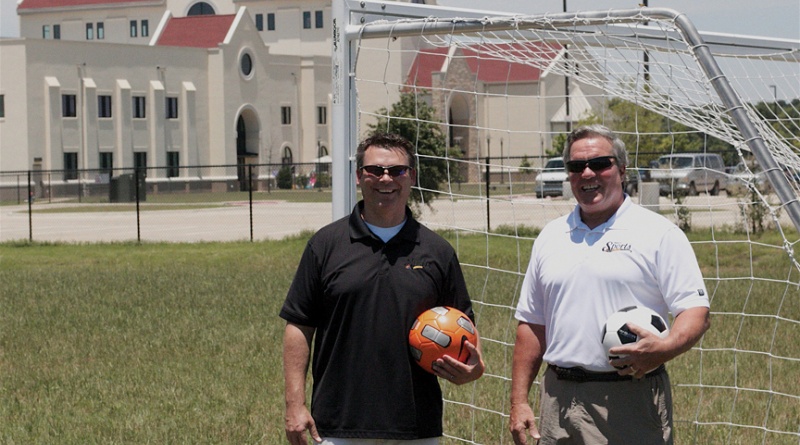 The vision was crystal clear

as Scott Heusel looked out across the empty pasture that rolled south from Trinity United Methodist Church to the northwest corner of Green Oaks and Pioneer Parkway. Heusel didn’t see the emptiness. He didn’t see the challenges or the roadblocks others might have seen. He didn’t even see the 15 acres of vacant land looming right in front of him. What Heusel, Trinity’s associate pastor and youth minister, saw was a community’s most precious resource of all.

Kids of all sizes, all shapes, all colors. Kids kicking soccer balls, playing softball, throwing footballs and Frisbees. Kids laughing and having fun. And not just any kids, either. He saw kids who might never before have had a chance to play organized sports or be part of a team, kids who had never pulled on a real team jersey, or a ball glove, or worn a pair of real soccer shoes. Trinity’s move to its new 28-acre home from its original location on West Park Row opened up a whole new vista of possibilities.

whose mission is to provide Christian-based sporting activities for children, youth and adults, regardless of race, economic means, religion or athletic ability.

“I’ve always wanted to combine my two passions, sports and ministry,” says Heusel, who spent time as a trainer for both the San Diego Padres and San Diego Chargers before going into the ministry. “Moving here to this new facility in 2012, I saw all this space we had and thought how neat it would be to be able to offer baseball, softball, soccer, volleyball, basketball, right here on our campus.”

Bill Bowie, a Trinity member and president of RTI, a resin consulting company, caught Heusel’s vision, too, and put his passion, money and organization skills to work in forming TSF.

Bowie, who spent 14 years on the board at the Arlington YMCA, is the board’s chairman. Trinity’s senior pastor, Dean Posey, stepped forward to donate all the proceeds from his book, “12 Gifts We Can’t Afford to Lose,” to support the endeavor. A May fund-raising golf tournament at Shady Valley drew a field of 120 golfers and sponsorships from the Texas Rangers, Moritz Car Dealerships, Hutcherson Construction, JW Neal and Associates and Jerry and Becky McCullough. Former mayor Richard Greene teed up the honorary first tee shot for former Ranger’s president and U.S. Ambassador Tom Schieffer.

“Even with everything the Y does, and with programs like the Boys &amp; Girls Clubs and others, there’s a dire need for sports playing fields in Arlington,” Bowie points out. “This seemed like the perfect marriage of discipline, teamwork, sacrifice, serving others, all those things we talk about in our faith, and an opportunity to put kids on those fields.”

This summer there are three soccer fields and a temporary softball/baseball field in operation. Liverpool, a youth soccer organization with ties to the Liverpool, England, professional team, has invested $100,000 in an irrigation system and is using fields there, along with the YMCA. TSF has invested another $85,000, collected from donations and Dr. Posey’s generous gift, into the fields.

What Bowie and Heusel envision for the future

is a sports center with lighted fields, concession areas, pavilions, another baseball diamond and soccer fields that can also double as flag football venues. All of this will combine with the basketball and volleyball programs already underway in Trinity’s Activity Center.

“We want to be able to offer the kids who can’t afford to play a chance, to tell them just come and we’ll take care of things, give them a jersey, make them part of a team,” Heusel says. “It’s amazing how a soccer ball or a softball can transcend barriers of language, of race, or whatever.”

Those kids Heusel could once see in a vision? He doesn’t have to squint any more. They’re there, and more are coming right behind them.