History (still) in the making 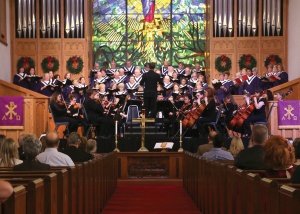 On May 20 – appropriately, the 140th day of the year 2018 – First United Methodist Church of Arlington will celebrate 140 years of worshipping, learning and serving during a special Heritage Sunday service that begins at 8 a.m., followed by an afternoon of food, fellowship and fun.

To commemorate the milestone, the city’s oldest church from the original township of Arlington will host a gathering featuring a number of special events. Several former pastors have been invited to preach that Sunday, and a host of visitors from the community – including many local civic and social icons past and present – have pledged to attend all or part of the activities.

After the service, the church will provide barbecue sandwiches for lunch, and members of church Sunday School classes will provide chips, drinks and dessert, as well as volunteer to serve the meal to those in attendance.

Bart Thompson, a lay leader at the church who, like many of his fellow members has been busy the past few months planning the celebration, says First United Methodist has carved a special niche in city history.

J.D. Cooper is one of those names. For years, he has been memorialized by one of the city’s more-traveled and better-known streets. He was an early landowner who helped lay the foundation for the city of Arlington in the 1870s and 1880s.

Another name of note is that of Chester W. Ditto, for whom a city golf course was named. He, too, was a member of First United Methodist.

Billie Liddell, the church’s archivist/historian – and a member since 1955 – says First United Methodist got its start when Cooper and 12 other men who had taken up residence in the newly established town gathered in 1878 as “Methodist Friends” at Shults’ Lumber Company. A church was born that day.

Liddell says FUMC has had an interesting – and sometimes tumultuous – physical history. The little white frame house that served as a genesis gave way to a brick building that burned down. It was rebuilt, “but that building also burned down,” Liddell says. “Electrical fires were blamed for both accidents.”

Spiritually, FUMC has always been one of the city’s pillars. The current site of the church opened in 1956, and though there have been renovations since, the ever-growing and evolving building remains one of the city’s architectural treasures. Liddell’s family recently donated money to create a 10-stop walkway that marks the church’s high points over the years.

This month will certainly fit that category, as well. “This church has been a big part of my life and my family’s life,” Liddell says. “When I walk in I always feel loved. That’s what this church is all about.”