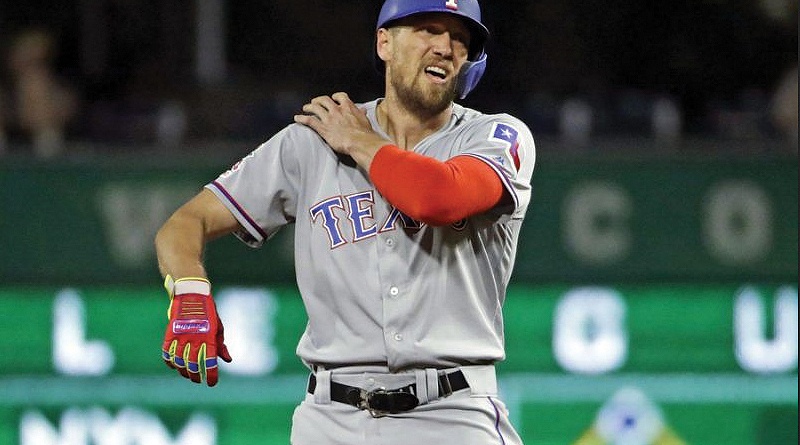 It may sound like a fairy tale to our younger readers, but once upon a time people went to the store to rent movies or video games. Arlington old timers may remember a video store that rented these products called the Video Library. Hunter Pence remembers it.

“If we got really lucky we got to rent a movie or video game; I would rollerblade to go get it. The Video Library was the name of the place. It’s not even around anymore,” Pence says when recalling younger days in his hometown.

You may have seen Hunter rollerblading towards home with a bag full of movies and a huge smile on his face – the same smile he flashes now every time wears his Rangers uniform. He has spent part of 13 years in the big leagues in four different organizations, but somehow that Rangers uniform fits best.

“One of my favorite teams, I was 9 or 10, and we were called the Young Rangers,” Pence recalls with a far away look in his eyes. “We had the exact same uniform as the real Rangers at the time, and I thought we were so sweet!”

And so the dream began. But while Hunter admits that he dreamed of playing for the Texas Rangers, he felt like he should be somewhat realistic even when fantasizing.

“The dream of making it to the big leagues seemed like such a massive, far away thing back then,” Hunter says, trying to keep it real. “I was almost like, ‘it would be selfish to be picking my team.’”

Amazingly, when he was 19, he had a chance to pick his team. After four years as an Arlington Colt, he spent one year at Texarkana College. He had told the coaches at UTA that he would spend one year in Texarkana, then he would come back home to Arlington to play for the Mavs. He had such a good year for the Bulldogs that many other schools became interested in him, including Miami and Rice.

Despite being flattered by the interest, Pence honored his commitment to UTA. He is proud to recall his dad praising him then for being a man of his word.

He also remembers the first time he saw the stadium he now calls home.

“On a field trip in elementary school. I just remember walking in and seeing it before it was built and thinking, ‘Whoa, look how far the fences are!’ an awestruck Pence recalls. “I was like, man, it would be awesome if you could hit a home run over this fence. Like that has got to be so cool!”

He has hit home runs in 30 different big league ballparks in his All-Star career, including RFK and Shea – two places that no longer exist for baseball. And five times he has felt that cool sensation of finding the seats among his hometown people at Globe Life Park in Arlington.

When Globe Life field opens next year Hunter will have a chance to homer in his 31st big league stadium. But for now, like so many of us, he is savoring the final year in this beautiful ballpark.

“I love this city,” Pence says. “This is the last year of a ballpark that I was here when it was built. So it means a lot to me. We’re going to do everything we can to make it a special season.”

In many ways it already has been special. This season has marked the beginning of a new era in Rangers history, with a new coaching staff, a new attitude and a bunch of new players. Including Hunter Pence, who is right where he belongs. Hunter Pence is home.