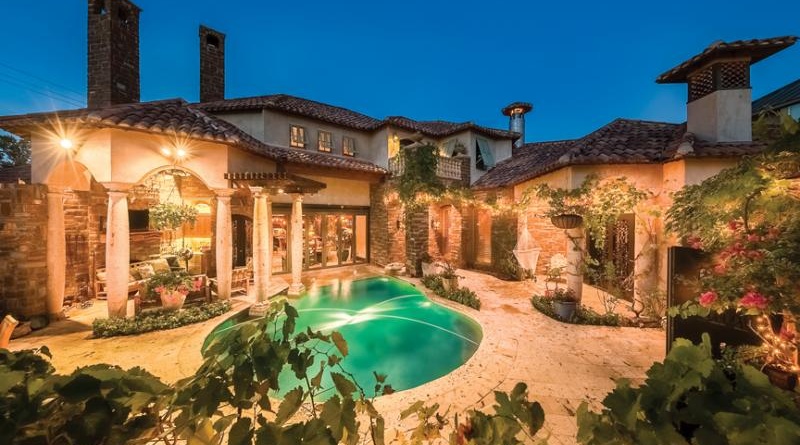 When Britt and Janet Phillips set out eight years ago

Britt, who builds homes for a living, was developing a neighborhood in Pantego at the time. “And I thought, ‘hey, this would be a great place to build a house for us,'” he said.

As you can see here, he one-upped the great location with a home of distinction, which proved to be everything he and Janet had hoped they would find.

For starters, there’s plenty of room for the couple’s two children and four grandchildren when they pay visits, something Janet especially enjoys. The dwelling covers 4,000 square feet and has three bedrooms, three and a half baths and more than enough living area for practically any endeavor.

Then there’s the “wow factor.”

That living room is just a few steps from the pool, Britt said, so when members of his family or friends decide they want to take a dip, those who don’t want to join them can watch from the comfort of the house.

Speaking of: Britt said he went with Tuscan for the design of the home because it’s a style that fit both the neighborhood and his and Janet’s tastes. But, again, he embellished the surroundings with personal touches, most of which have stories behind them.

For example, the wine room you see on page 44 would be stately in its own right, but its genesis is rooted about 15 miles away, where renovations to Fort Worth’s Amon Carter Museum a decade ago left a large supply of quality bricks available to any/all takers.

“All the material that went into building the wine room came from the Amon Carter Museum,” Britt said. “In fact, I had that in mind – using that material on a wine room – whenever I got around to building our house, so that’s what we did.”

, who helped the Phillipses tailor the dwelling to fit their needs – and several desires.

The living area fits the latter category and is also part of a personal story. “I am fortunate to be able to hunt and collect these trophies,” Britt said of the ensemble of prize game that adorns various walls of the room. “That’s our great room. It’s very comfortable and entertaining, and it’s special to me because it represents something I enjoy doing. It also starts conversations when people come over.”

It’s good that the home has ample living area

because Britt said the couple is very much into entertaining. They do it when their children come over with the grandchildren, and they welcome friends often.

“We enjoy entertaining year-round,” he said. “The outdoor cooking area and the pool, of course, are great for family gatherings. Inside, we use the main living area, the study and the game room for large family gatherings.”

Elsewhere, Britt and Linda, a former flight attendant for American Airlines, have other favorite spots, such as the master bedroom, the kitchen and the dining room. And outside … Well, that’s a haven unto its own. Besides the aforementioned pool, there’s the spacious patio, which is put to use when the weather warms up and which is enhanced by a collection of flora that gives the collection of fauna inside a run for its money.

“When we built this home we were hoping to come up with something that was warm and comfortable, and I think we accomplished that. Every house has a story, and I think the story our house tells is one that’s fun and welcoming.”