How I became a Pickle Queen 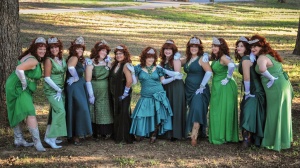 “Throw me some beads!”

The roar from thousands of people bounces off the fronts of the stores lining Mansfield’s Main Street as the final two floats of the World’s Only St. Paddy’s Pickle Parade wind their way down the street. From my post on the back of the second float, I twirl a strand of green metal beads over my head and revel in the chaos.

Hard to believe that six years ago, this was all just a quirky idea inspired by a trio of potent margaritas.

Hello, my name is Amanda Rogers, and I am a Pickle Queen. And as far as I can remember, this is how it happened.

In the fall of 2011, I had just interviewed the owners of Best Maid for a newspaper article I was producing. Best Maid, the largest pickle company in the state, the third largest in the nation and a homegrown Mansfield product, has been in the same family for four generations.

After work, my husband and I headed to Steven’s Garden & Grill for margaritas with friends. After the third one, I leaned across the table and told a friend, “I want to have a parade, a pickle parade, a St. Patrick’s Pickle Parade. And I want to have Pickle Queens.” She looked me in the eye and said, “I’d come.”

Inspired, I told some more friends, and they told some friends. Then we talked to the city council and Best Maid. They both said they were in, gave us some money and a city permit.

Holy cow, this parade was really going to happen. 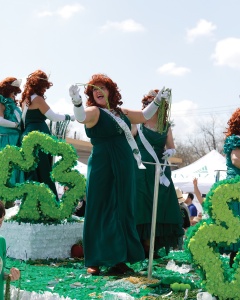 Now I had to find some queens. But not just any queens, mature, well-preserved, spicy ladies over age 40 with enough sass to get on a float in a red wig, thrift store prom gown and enough rhinestones to light up a disco ball.

The idea sprang from the Sweet Potato Queens in Jackson, Miss., who have their own St. Patrick’s Day parade. They were originated and ruled by Jill Conner Browne, the head queen and author of several Sweet Potato Queen books.

I signed us up to be an official Sweet Potato chapter, and got a call from the boss queen herself. Browne laughed her head off at the idea of a bunch of women brave enough to be Pickle Queens and gave me some pointers on parades, queens and dealing with a pack of women.

So I sat down some of my friends, and some of their friends, and explained the idea – after I filled them full of margaritas. And the brave (foolish, adventurous, crazy) ones signed on – actually, 20 of them!

Discover Historic Mansfield, a local nonprofit group, stepped in to help us put together the details, and we put out the call for parade entries. Cheerleaders, Scouts, businesses and community groups signed up.

We figured maybe 500 of our friends, families and neighbors would show up. After the parade, we planned to head to Steven’s, listen to our favorite local musicians Scott & Steve, hold pickle eating and pickle drinking contests and have margaritas.

March 17, 2012, was a beautiful, sunny spring day. As the Pickle Queens mounted our two floats, we began to hear some interesting reports about the size of the crowd downtown, that there were a lot of people, a lot more than we expected.

When the floats turned the corner from Dallas Street onto Main, we gasped at the size of the crowd, more people than we had ever seen in downtown, at least 5,000, estimated the Mansfield police. Some of the Pickle Queens started to cry, others were in shock. I started to smile.

In the past six years, Pickle Queens have come and gone – we have an even dozen now. But the parade has kept growing.

The crowds have grown every year, too, peaking last year with approximately 35,000. The police have to estimate the number of people because we don’t charge admission to anything, except the runs, and that is to cover the cost. Sponsors, t-shirt and beer sales, and a portion of the hotel/motel tax fund from the city pay for the event.

There’s an all-volunteer board of directors that works year-round to promote and plan the event. They round up sponsors, line up volunteers, sign bands, find food vendors, sort parade entries, figure out how to fit in another vendor booth, balance the accounts, book porta-a-potties and an array of time-consuming behind-the-scenes jobs that make the parade and palooza possible.

And the Pickle Queens do a lot more than smile and sling beads into the crowds. We’ve helped build houses for Habitat for Humanity, packed bags of food for Feed the Kids, donated to the animal shelter, rung bells for the Salvation Army and funded a Pickle Queen scholarship for a graduating Mansfield ISD senior. The queens have also become part of the school district’s second-grade curriculum, explaining the importance of community. The state legislature even named Mansfield the Pickle Capital of Texas!

We have also appeared in parades all over the state, laughing and waving as people get their first look at a Pickle Queen. In our hometown, we raise some eyebrows. There have been rumors that we have secret rituals to choose new queens (we don’t), and that some of us are actually guys (we aren’t).

But when we go out of town, we can be a little overwhelming. You see the looks on people’s faces, the shock, the questions. “Are they for real?” “Are they insane?” Then women our age start to cheer – so do a lot of men. Teen-agers look appalled. Little girls like our sparkly jewelry, and little guys love the rock music blasting from our floats.

Being a Pickle Queen isn’t for sissies, but I have to admit that the view from the back of the float is pretty amazing. But they don’t let me have more than two margaritas anymore, just in case I have any more great ideas.