Is this the year? 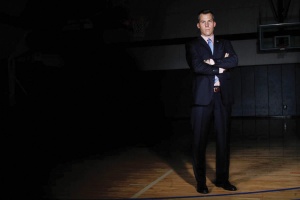 Downtown Arlington is dominated by and being revitalized by three-letter combinations. In 2009 it was NFL-HKS. In 2020 it will be MLB-HKS and in 2012 it was UTA-HKS. Did you realize that? The same firm that designed AT&T Stadium for the Dallas Cowboys of the NFL, the same one that is designing Globe Life Field for the Texas Rangers of MLB, also designed the College Park Center home of the University of Texas at Arlington Mavericks.
If you have never seen College Park Center, do yourself a favor and take in an event there. This $78 million facility is not only a jewel of downtown Arlington, but it is arguably the best building in the Sun Belt Conference. It hosts UTA men’s and women’s basketball, volleyball and concerts. It is also home of the Dallas Wings of the WNBA.
For anyone who ever went to Texas Hall for a Mavericks game, you must witness and experience of the difference at College Park Center. From the moment you walk in you will notice the big-time feel. And, whereas at Texas Hall it felt like an adaptation of Hamlet was about to ensue, here you will have no doubt that you are in a big-time college arena.
Even if there was any doubt at all, that would be erased when the Mavericks men’s basketball team takes the floor. After compiling a 27-9 record last year and advancing to the NIT quarterfinals, the Mavs have much bigger plans this season.
“This is definitely a team that can win games in the NCAA tournament,” says 11th year coach Scott Cross. “But you can’t win games unless you get there.”
Those 27 wins last year represent a school record. It is the sixth time in school history that the basketball team has won 20 or more games, and four of those six have happened under the watchful eye of Coach Cross. But the Mavericks didn’t get into the NCAA tournament because they did not win their conference tournament.
“It has been a one-bid league for a while, so if you come up short in your conference tournament, your chances of getting there (the NCAA Tournament) are slim and none,” Cross says. “So we have to be playing our best basketball that weekend in March.”
Besides, if records are made to be broken, then the record set last season may fall just one year later. Consider that the Mavs have eight seniors on the squad, and when it comes to March Madness, senior leadership and experience make a huge difference.
“I’m a basketball junkie, and I have watched the NCAA Tournament since I can remember,” says senior Kevin Hervey, who has been selected as the Preseason Player of the Year in the Sun Belt conference. “A lot of those Sweet 16 teams and Cinderella stories have had a lot of older guys. I think having experience definitely helps you win games.”
Cross is the winningest basketball coach in UTA history, having guided the Mavs to 202 victories. Like so many great coaches before him, he says team defense is the key to this squad’s success. “You can’t always predict whether you’re going to hit shots, but if your guys are playing the defense they are capable of playing, then we are right there knocking on the door,” Cross says.
Last year during the NIT run, there were crowds of 5,000 packing College Park Center. Cross hopes that trend continues throughout the season this year.
“Who knows?” he says. “We may be able to pack this place throughout the season, and that would be awesome. It would be a huge home court advantage.”
The Mavs truly believe that with a senior-laden team, and a sixth man – aka UTA students and basketball fans from Arlington packing the arena – this could be their year. If it is, there will be a four-letter acronym present in downtown Arlington. That is NCAA, as in NCAA Tournament team.