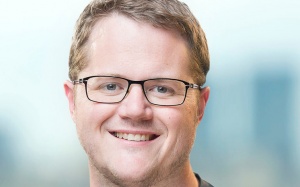 In a modern twist to an old idiom, one city’s trash data is a web app developer’s treasure.

On a whim, Matthew Taylor decided earlier this year to create www.istodaytrashday.com using open data on the City of Arlington’s website. Arlington residents who enter their home address into the search bar on Taylor’s simple web app are given a Yes or No based on the day of the week and their location within the City’s five trash pickup zones. Taylor said he created the app not only to provide a useful tool for residents but to encourage others to explore Arlington’s open data for possible applications with even bigger potential.
“It’s hard for people who aren’t already in tech to get interested in something like this. But seeing how something like this was simple to do and that it solved a problem some people have – it’s a good way to make other people to say, I have an idea, too,” Taylor said. “Once people sit down and start thinking about ideas, it becomes contagious. It only takes a couple people to sit down and say, ‘OK, let’s build this.’” 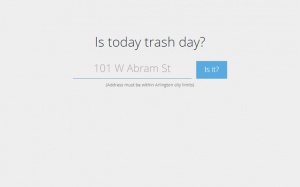 Arlington is one of nearly 100 cities partnering with the What Works Cities initiative, which aims to improve the effectiveness of local governments by enhancing their use of data to help determine priorities, allocate resources and tackle challenges facing the community and to increase public transparency.
“Arlington realizes data is a strategic asset. Sharing data between city departments makes us more productive and efficient and can give us valuable insights,” said Jennifer Wichmann, acting Deputy City Manager. “Sharing data externally improves our transparency and also opens up opportunities for collaboration with the private sector – people who might take our data and do something useful or interesting with it or create businesses out of it.”
Working with the Sunlight Foundation and Johns Hopkins University, Arlington drafted an Open Data policy in August to govern the release and accessibility of city data, ranging from code violations to construction permits. After gathering public input from a wide range of stakeholders, Arlington formally adopted its Open Data Policy in October. A variety of searchable data is available to the public through the Open Arlington portal.
Taylor, who has been a front-end developer for a decade, applauds Arlington’s Open Data initiative.
“I’m 100 percent in favor of every city doing this. It could change how people live. if someone can find that one application that really does improve someone’s life, that can make a difference. And Arlington is supporting that,” Taylor said. 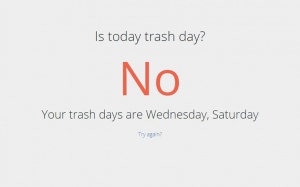 With his trash day app up and running, Taylor said he’s considering using Arlington’s open data to create a web app designed to let users check the inspection scores of nearby restaurants alongside online reviews. And he’s looking forward to seeing what innovative applications others in the community may create.
“You don’t have be a computer science guy to do something with this data. You can build something really simply,” Taylor said. “It doesn’t take a government agency or a huge company to make something impactful. It can be one guy over a couple of nights who can make something useful for an entire city.”