by Donna Darovich
in Business and Education, Community
0 0
0

“Mikey, our pet red-eared slider turtle talks to me in the weirdest way,” fourth grader Lucas Douglas noted in his entry for the 20th annual Sheri Capehart Animal Essay contest, as he tackled the assigned topic, “How do you think animals communicate with humans?”

“When I drop 2 pellets of food down in his tank, he looks at me,” he continued. “He doesn’t say a thing, then, at the corner of his eye, he sees some food, swims to it (and) then says to me “food, food, food, gimme, gimme, gimme!” He gets very excited. I used Temptations treats to test how my cats talk to me. Most of them follow me, but my cat Mary kept running away playing. The cats mostly ignore us, but they do like to meow and be petted, but only when they want to be.”

Other topics dealt with a worldwide rule for dealing with animals, how would having their own holiday work, and what might animal shelters look like in 2060?

On the latter, Wood Elementary sixth grader Liam Allen suggested three new inventions, including an injection of “Old B Gone,” which will make an animal that is old for its breed five years younger. He calls it “Youthanization.” 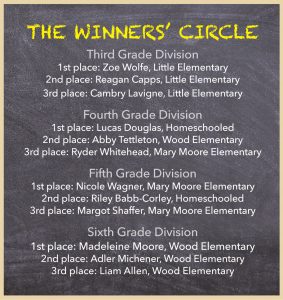 Promoting responsible pet ownership is the focus of the competition, but it has also been a source of financial knowledge for student winners and often their families.

Part of the process has been for the students and their parents or guardians to come to the EECU to receive and deposit their $100 winnings in a savings account. Often, Capehart says, the parents had not been in a bank environment, and many opened a checking or savings account for the first time.

“It is a significant ripple effect,” she says. “We want to get the kids to think about what they might do after high school.”

The essays were not graded, but judged on the elements of “effective writing and responsible pet ownership.”

The contest was sponsored by Spring Creek Barbecue, the Educational Employees Credit Union, UT Arlington Trio, the City of Arlington, and the city’s communications department.

The City of Arlington Animal Services Center Advisory Board selected finalists for each grade and final judging was done by guest judges Tabatha Knickerbocker and Carole Hoyer and Capehart.

The essays are all available to read on the City of Arlington website, arlington-tx.gov.