by ArlingtonToday Magazine
in Business and Education, Commentary, Community
0 0
0 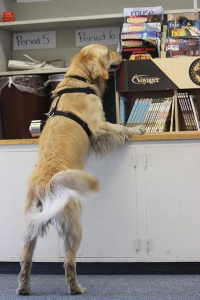 Interquest Detection Canines of North Texas is the Mansfield-based franchise of a contraband detection canine company that serves about 150 school districts, as well as private and charter schools, industries, rehabilitation centers and homes where parents are working to help their teens get clean.

“Our canines find drugs (like marijuana, cocaine and heroin), drinking alcohol (like beer, wine or whisky), abused medications (both over-the-counter and prescription), as well as gun powder-based items like bullets or a gun itself,” says company President Brenda Hayes.

The company was founded in 1999 after Hayes’ husband lost his job. “We both prayed all weekend seeking God’s direction,” Hayes says. “At the end of the weekend, we both separately and independently felt we heard him saying with that still small voice … ‘Go into the dog business.’ We called a friend of a friend in Houston, and the next thing we knew he was offering us to buy the first franchise of now 45 across the nation. We are now the largest canine contraband company in the nation. It started with just me and my husband, and now we have a dozen employees.”

Interquest Detection Canines of North Texas covers the North Texas area, from Tyler to Abilene, up to the Red River. “Only one in a hundred dogs make our program,” Hayes says. “The majority of our dogs come from rescue or Craig’s list. Typically they are the kind that drive people crazy about wanting to play with a toy.”

Rusty was such a dog, Hayes says. “We found him in a kill shelter on the day he was to be put down,” she recalls. “We trained him up, and he found a gun in a car and ended up saving many lives that day.”

Rusty’s story typifies those of the Interquest detection dogs. Hayes says most are trained by Mindy Gordon on-site at the local office. “She can train them in just a few weeks,” Hayes says, “but then they must be finished by a seasoned handler over the next year.”

Clients interested in working with Hayes can contact her at 817-572-1111. “When a new client calls we like to go visit them and have a conversation about their expectation, as well as take a look at their facilities,” Hayes says. “This enables us to best serve what their needs are and give them a reasonable price.”