Look what’s on the horizon 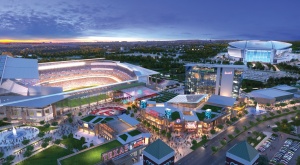 Go ahead, Arlington, pinch yourself.

You’re not dreaming. It isn’t a mirage. Texas Live!, that long-promised, long-awaited dining, entertainment and hostelry complex by the Rangers’ ballpark, is under full-bore construction … no bull.

Oh, wait. There is a bull – two, in fact. They’re the mechanical ones in the PBR (Professional Bull Riders) Country Bar. That’s one of four eat and/or drink venues announced so far alongside Lockhart Smokehouse, Revolver Brewing and a restaurant by celebrity chef Guy Fiere. They’ll be housed in a seven-acre spread of entertainment spots and an upscale hotel/convention facility.

Small wonder, then, that Arlington City Councilwoman Kathryn Wilemon labeled the mood at the formal groundbreaking last March as “exhilaration.”

“We have looked forward for a long time to the development around that ballpark – quality, high-end development – and that’s what we’re getting,” she said. “We’re getting an extremely exciting new venue that I think we all deserve, and I think all the citizens of Arlington and all the worldwide visitors who will come here are going to be impressed and enjoy it.” 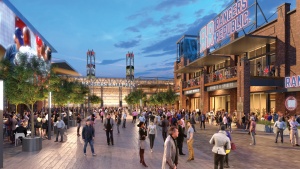 Three primary entertainment venues have been announced:
• Rangers Republic, described by the developer, The Cordish Companies, as a family-friendly “ultimate fan clubhouse,” with 30,000 square feet of entertainment and dining on two levels.
• Live! Arena, a central, 35,000 square-foot gathering place also with multi-level dining and entertainment.
• Arlington Backyard, an outdoor pavilion able to seat 5,000 patrons for events ranging from art exhibits to concerts to charity and community events.

All this adds up to about 200,000 square feet and was supposed to be open for the Rangers’ home opener. That date has now been moved back to “late summer or early fall,” according to Blake Cordish, the developer’s CEO. But that’s actually good news because it doesn’t stem from any problems, but is due to an expansion of the project, namely the hotel.

Loews Hotels announced in May that it would team with Cordish and the Rangers to add Live! by Loews, a 350-room facility with an attached 35,000 square-foot convention center. The hotel’s amenities include an event lawn overlooked by a 40-foot tower, an outdoor infinity edge pool and a rooftop terrace with meeting rooms and a large central area for private functions. The convention area will have ballroom/banquet room seating for 1,500 and an outdoor terrace overlooking Johnson Creek.

The price tag is upwards of $400 million, $50 million of which will come from the city’s Arlington Tomorrow Foundation. The project has also qualified for assorted tax breaks. 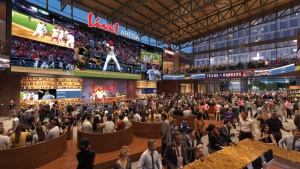 Worth waiting for? You bet, says Charlie Parker, Wilemon’s Council colleague. He recounts a promise for development around the stadium made in the early ‘90s as Arlington voters were pondering a tax increase to help fund it. He recalls the Glory Park venture that never got off the ground. “That was when ’08 happened, and we all know that money tightened up,” he says. “You couldn’t get anybody who was going to lend you money to do something of this stature.”

Everything worked out for the best, Parker says. “If you wait long enough, you can see the mistakes that other people have made and you can avoid those,” he says, adding that the failure of Glory Park probably worked to the city’s ultimate advantage. “We get a truly great venue that I think is going to be 10 times better than what Glory Park ever would have accomplished.”

Among the pieces to fall into place have been a rosier economic picture and the construction of AT&T Stadium. “It all really got started when we built the Cowboys’ stadium,” Wilemon says. “That’s what got us going. Now we’re getting another stadium and also the entertainment, restaurants, retail and hotel.”

While there’s no cooperative agreement between Texas Live! and the Cowboys, it’s easy to envision football as well as baseball fans taking advantage. Imagine a vacation, or for Arlingtonians a stay-cation, including a first-class hotel, Texas Live!, a Major League Baseball game one day and an NFL game the next. But it’s a mistake, Parker says, to link Texas Live! only to game days.

“Game days are easy,” he says. “It’s the off days that are the challenge, and that’s where they (Cordish) come in with their management team. They’re very innovative.” He says Ballpark View in St. Louis, one of numerous Cordish developments around the country, might host a NASCAR watch party in the afternoon and then something like the Academy Awards the same night.

Moreover, he says, Cordish is one of the nation’s leading talent promoters, and can rotate its artists through the various venues. “I would liken it to a combination of Sundance Square and Bass Hall in Fort Worth,” he says.
What has city leaders really salivating, however, is the likelihood that the entertainment and hotel complex will be only the beginning. “The entertainment portion of a project really gives it a heartbeat,” says Cari Furman, Cordish’s director of communications. That heartbeat, she adds, can nurture the growth of the project. The company’s Kansas City Power and Light has gone from the original single block to seven, including two residential towers. St. Louis’ Ballpark View is seven times its original size. 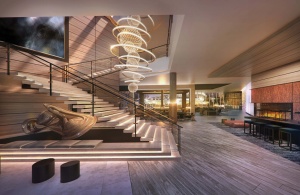 “This is the beginning,” Wilemon says, “and I think it’s only just going to be a domino effect that will continue until they can’t build anywhere else.”

Some of those dominos are already falling. Parker points to a new Plains Capital Bank to be built at the corner of North Collins and Rogers Street, across from AT&T Stadium, and AISD’s combination performance center and natatorium going up on Division Street at the site of the old Eastern Star Home. And, while he won’t name names, he hints that “you’re also going to probably see other structures in and around the stadiums.”

“This project is really special, and the timing is really special with the new ballpark opening right around the corner,” Furman says. “Arlington seems like it’s booming with new growth, not just in the entertainment district, but elsewhere, too.”

“We couldn’t have done this at a better time,” Parker says of the simultaneous development of Texas Live! and the Rangers’ new stadium. “We think we’ve hit a very long ball, and I think it’s going out of the park.”