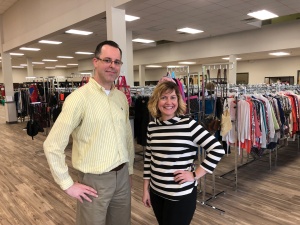 Only a stone’s throw separates the old Wesley Mission Thrift Store from the new location, but the difference seems miles away. “It’s just night and day,” says Greg Smith, director of social enterprise for the Wesley Mission Center. “Because of space limitations, everything was overfull and hodge podge. When we came here, we were very intentional about providing a good shopping experience with wider aisles and matching fixtures.”
The thrift shop, which finances outreach for the Wesley Mission Center, moved from 777 Walnut Creek Drive in Mansfield to 703 E. Broad St., on March 1. “People who know us from the old store stop and go ‘wow!’” Smith says. “They say it looks like a nice store, not a thrift store. Everything feels better when it’s lighter and brighter. We’re getting a lot of new customers because we’re in a store front.”
The new thrift store is just the start of a wave of new beginnings for the Wesley Mission Center. First, there’s a new name – the Mansfield Mission Center. “It was started by the First United Methodist Church, but separately incorporated five years ago,” says Carmin MacMillan, executive director of the mission center. “We really felt to be able to partner with the community the name change was important, to be seen as a community initiative instead of one church.”
In 2016, the mission purchased the new thrift store space – and the entire 33,000-square-foot shopping center where it is located. “Our vision was having a home in central Mansfield that would allow us to grow,” MacMillan says. To that end, the new thrift store has 7,500 square feet of retail space, compared to 4,900 square feet in the former store, plus a huge intake space where donations can be stored, sorted and priced.
Plans are already underway to move the rest of the mission – food pantry, financial coaching, ESL classes – into a 10,000-square-foot space next to the new store by next year. The mission, which is still on the First Methodist campus, is adding job skills classes taught by Tarrant County College professors. When it moves to the new space, it plans to add drop-in space for computer work and childcare for people in training.
Moving the thrift store first was important, MacMillan says, because it’s the engine that powers the mission. Seventy-five percent of the mission’s revenue ($800,000 of its $1.4 million budget) is generated by the store. “We’re three times what we were three years ago,” MacMillan says.

And light years from where the thrift store began in 1979.

“It started as a yard sale by the women’s group at First United Methodist Church,” MacMillan says. “They had so much stuff left over that they kept doing it. They had it in a Sunday school class, and at least three different locations before moving to the current First Methodist campus. It was in someone’s garage.”
When First Methodist moved to the corner of Pleasant Ridge Drive and Walnut Creek Drive in 1981, the Wesley Mission opened in an 1,800-square-foot building, moved into a new building in 2000, and that was expanded in 2007. For the past six months, Smith has been working to move the thrift store into its new digs. “Our pricing strategy is: we will be the cheapest,” Smith says. “We’re in the thrift store shopping business, not the thrift store sitting business.”
Longtime thrift store shoppers know about the prices, and they appreciate the new store. Sales were up 50 percent the first month the new store was open, Smith says. “It’s bigger, cleaner, more organized,” says Sam Danti of Mansfield. Terre Sumpter of Mansfield also appreciates the larger space: “You have a lot more room to spread things out. It’s a lot easier to look at clothes. It’s very organized. The people have always been very nice. I love it that they take that much pride in what they do. I also like that it’s Christian-based and they help the community.”
So what’s next? Renovations to the exterior of the shopping center and the parking lot, MacMillan says, along with starting construction later this year on the new mission center. And after that? “I think it will be things that nobody expects us to do,” MacMillan said. The Mansfield Mission Center Thrift Store is at 703 E. Broad St. Hours are 9 a.m.-7 p.m. Monday-Friday, 9 a.m.-5 p.m. Saturday, closed Sunday. The Mansfield Mission Center is at 777 Walnut Creek Drive.