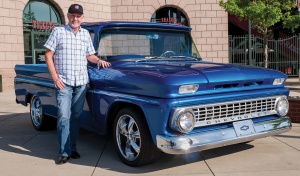 Jamie Adams is one of the region’s more successful real estate executives, has assisted some 225 professional athletes in finding their homes, is close friends with two members of the National Baseball Hall of Fame, and manages the Centerfield Office Building for the Texas Rangers.

And that’s just the beginning of the multifaceted world that seems to be constantly swirling around him.

But, his first love was and is this Rangers Blue 1963 Chevrolet Short Bed Pickup.

It all began when he rebuilt one just like this during his high school junior year in 1978 in his auto mechanics class. “I had some of my greatest memories in that truck,” Jamie says. “I kept it for the next three years and sold it for $600 – and had wanted it back ever since.” 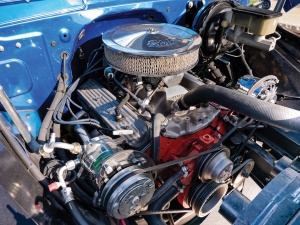 While lots of guys could say that about their first car or truck, Jamie wouldn’t let go of the longing until he found one. His cousin, proficient in bringing old vehicles back to life, would spend two years making it new again. It would be restoration from the frame up and modified with some transformations throughout, except for the body that would remain true to Chevrolet’s pickup design that would reign for most of the ‘60s.

That work took place where Jamie had grown up in Plainview, Texas, and it was completed just in time for him to drive it proudly to his high school class’ 30th reunion.

“I really enjoyed that weekend, running up and down Fifth Street and circling the Sonic Drive-In – just like we used to do when we were teenagers.”

Besides the Rangers blue color – what else would it be? – it’s equipped with a small-block, 350-cubic-inch engine with a Performance camshaft, a Holley four-barrel carburetor, a turbo 350 three-speed automatic transmission and a 373-rear end.

For those not into mechanical features, think of it all combined to deliver power, speed and handling that is a considerable upgrade from the way this 55-year-old work truck was originally outfitted.

“When I first brought it home my two boys, Jared and Jeremy, wanted to know why I had gotten the old truck. So, I loaded them up for their first trip, with our destination being one of those Sonics.

“A cute young girl brought us our order, she spent some time admiring and declared, ‘That’s a cool truck!’ I turned to the boys, and said, ‘there’s your answer.’” 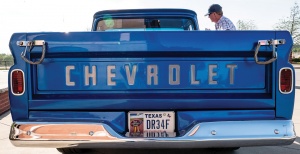 While he drives the truck frequently, it’s hard to imagine where he finds the time.

“In 1989, the Rangers signed Nolan Ryan,” he recalls, “and I helped him and Ruth get settled into a home, became friends with the family and started helping with their charitable foundation. I met Ivan ‘Pudge’ Rodriguez in 1992, helped him get settled in and started the Rodriguez Foundation in 1996 and managed it for him for 12 years.”

My first opportunity to get to know Jamie came at a Johnnie High Country Music Revue benefit for the River Legacy Foundation during the foundation’s 1994 capital campaign to raise money for the nature center. He brought Rangers heroes of the day Benji Gill and Dean Palmer to the event, where they signed autographs and provided Rangers memorabilia to be auctioned.

He has done that for non-profit organizations throughout the community. On the impressive list of the area’s better known athletes with whom Jamie developed lasting relationships are names like Yu Darvish, Dirk Nowitzki, Buddy Bell, DeMarcus Ware, Josh Hamilton, Donnie Nelson, Jason Kidd and Dez Bryant. 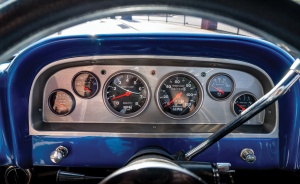 Then you can add to that lineup team owners, managers, coaches, and many more.

All of that grew out of the time he was working two jobs, one as a rodeo clown and the second selling cowboy boots. One of his customers, Rangers veteran infielder Bill Stein, talked him into getting his real estate license and began introducing him to his teammates.

Jamie’s spacious office headquarters doubles as a professional sports museum. Some of the better local collections of memorabilia, much of it one-of-a-kind and hard to find autographs, are displayed on his walls, in showcases, and adorning furniture throughout.

Spending time with him makes it difficult to decide which of his specialties deserves primary focus among all the choices. You could buy some real estate, tour the museum, or take a ride in his “first love.”

After concluding Jamie’s world is pretty impressive for a guy who was once a rodeo clown, here’s a suggestion: Do it all. 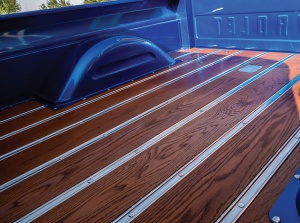