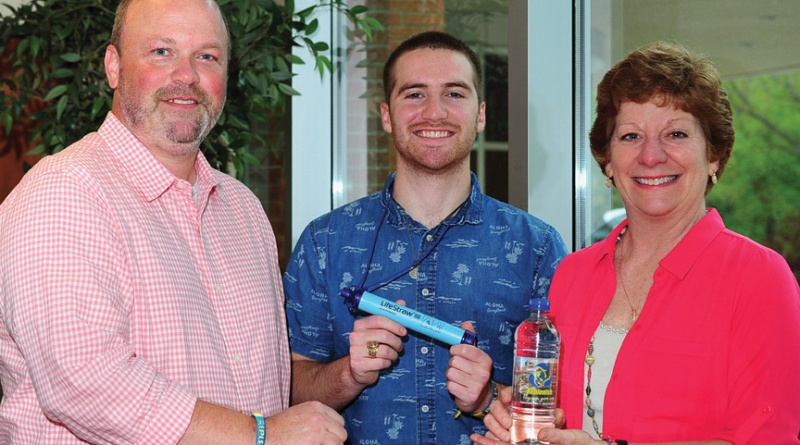 Water makes up 60 percent of our bodies.

It’s a primary ingredient for most everything we put in those bodies. Yet 900 million people – almost one of every seven – have no access to clean drinking water.

Brian Lamb and his mother Barbara want that number to drop and to that end formed a non-profit, Replenish, Inc. How far can they go? “Until every soul has clean water, I guess,” Brian says.

The call to action – he gives all the credit to Jesus – came just after his graduation from Martin High School in 2012, and he didn’t waste any time getting started, working with Barbara to establish Replenish even before starting college. He graduated from Texas A&M last year with a major in leadership.

The Lambs chose clean water as their mission, he says, partially because the Bible uses it “as a really beautiful metaphor to demonstrate who Jesus was and is.” On the practical side is the idea that escaping poverty begins with fulfilling basic needs, and nothing is more basic than water.

was patterned after Tom’s Shoes’ “Buy One, Give One” campaign (also conceived by an Arlington native, Blake Mycoskie). The Lambs partnered with Alexa Springs in Arkansas to buy bottled water under their own label for shipment to places in need. The problem they faced initially was twofold: First, shipping water was extremely expensive. Second, it might make people on the receiving end too dependent.

The solution was to sell the water locally, still shipping some to areas hit by natural disasters, and use the proceeds to give people LifeStraws, an inexpensive way to purify their own water.

A subsidiary of the Swiss firm Vestergaard, the LifeStraws used by Replenish come in two forms. The personal model is nine inches long, weighs only two ounces and can be worn around the neck. It’s used exactly like a straw – put the tip in water, however gunky, and sip through the mouthpiece. It lasts about three years, filtering about 1,000 liters of water. The community model, provided to churches and schools, is a large tub with a spigot at the base capable of filtering up to 100,000 liters. Replenish doesn’t actively seek opportunities. Instead, Barbara says, they “wait for God to reveal them. God has put people in our lives to further the cause.”

For example, while furnishing LifeStraws to Haiti through the Fort Lauderdale, Fla., Rotary Club’s Water Project Initiative, they impressed project chair Martin Brody so much that he proposed a program to furnish LifeStraw community models to every school in rural Kenya.

That led to yet another partnership

working with Fred Gituku and his sister Anne – he lives in the U.S., she in Kenya – to identify and prioritize areas of need, distribute LifeStraw products and conduct training for recipients.

To date, Replenish has furnished water and/or LifeStraws to 17 countries from Mexico to Moldova. Barbara sums up the organization’s mission in three words – “God, Water, Education” – but the religion isn’t heavy-handed. “Our spiritual aspect answers the question of ‘why are we here?'” Brian says. “When they see people coming halfway around the world just to help them, they’re going to have questions, and our answer is ‘Because God loves us, we love you.'”

Anyone wishing to donate to Replenish

can do so through the organization’s website, Replenishwater.org. The site also has an online store selling caps, t-shirts and water by the case. Shipping is available throughout the DFW area and in Waco and Houston.

All proceeds go toward the mission since no one involved with Replenish draws a salary. Brian, a substitute teacher in Grand Prairie, said that might change eventually,

“but our intention is not to make money. If that were our intention, I don’t think God would bless us as He has done.”