Making the grade (A+)

by ArlingtonToday Magazine
in Arlington News, Business and Education, Community
0 0
0 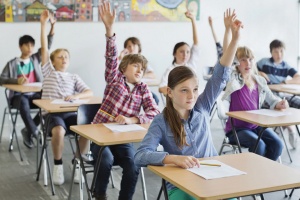 Area schools and school districts continue to be standard bearers among Texas academic institutions. From the classroom to the sports arena, from the stage to the curriculum that prepares young people for all stages of life, schools in this region are earning high marks. Here are some examples of academic excellence in progress …

Arlington ISD
Jennifer Fuller, an English teacher at Arlington Collegiate High School at TCC – Southeast, was recently awarded a Milken Educator Award during an assembly in front of the school. The honor comes with an unrestricted $25,000 cash prize.
Fuller is among up to 45 educators who will receive the prestigious honor during the 2017-2018 season. The Milken Educator Awards, hailed by Teacher magazine as the “Oscars of Teaching,” has been opening minds and shaping futures for 30 years. The initiative’s goals are two-fold: to celebrate, elevate and activate innovators who are guiding America’s next generation of leaders and to inspire young, capable people to consider teaching as a career. Milken Educators believe, “The future belongs to the educated.”
Milken Educators are selected in early to mid-career for what they have achieved and for the promise of what they will accomplish. In addition to the $25,000 prize and public recognition, Fuller’s honor includes membership in the National Milken Educator Network, a group of more than 2,700 top teachers, principals and specialists dedicated to strengthening education.

Primrose School
The blog “Pointers for Parents” (primroseschools.com/blog) notes that early exposure to music is an important part of every child’s development. The blog shows how parents are making musical memories with their children and stresses the need for variety in the music that is shared. Here are some musical genres the blog recommends for parents and their children:
• Children’s music, which generally has two things in common: lyrics that appeal to young ones and fun, corresponding movements.
• Popular Music (rock, country, hip-hop, rap and many other styles), which has a strong sense of beat.
• Classical Music, which provides a great deal of musical nourishment.
• Jazz, which tends to focus on rhythm, harmony and intricate melodic lines and often features spontaneous interaction and improvisation.
• World Music, or music from other cultures that can enrich a child’s sense of the variety of musical sounds available, especially since this genre often features more unusual instruments.

The Oakridge School
A football standout for The Oakridge School will play tight end for Baylor University. Surrounded by his teammates, coaches, administrators and host family, Christoph Henle, an international student from Austria, made his college choice official last month. The 6-foot-6, 230-pound senior finished second on the team in receiving last year, catching 41 passes for 579 yards and nine touchdowns. The Dallas Morning News SportsDayHS staff ranked him among the top 100 senior football recruits for 2018 in North Texas.
Henle is excited about his future and thankful for the foundation he received at The Oakridge School that he believes has prepared him for college. “All my coaches, the teachers, classmates and teammates have been so supportive during my time here,” says Henle. “The classwork has been challenging, I’ve grown more independent, and Oakridge has taught me how to get through stressful times and deal with problems that arise in life.”

Mansfield ISD
Two Mansfield ISD staff members who go above and beyond became the district’s latest Heartbeat Award recipients. Eryn Kriewall, music aide at J.L. Boren Elementary School, and Natalie Driver, educational technology trainer, were presented with the award last month.
The Heartbeat Award recognizes employees who display heart in their lives and inspire other district employees through their actions. The award, according to Superintendent Dr. Jim Vaszauskas, is second in significance in MISD circles only to getting a school named after an employee. The Heartbeat Award was established in January 2003.

Hurst-Euless-Bedford ISD
The American Association of University Women (AAUW) is hosting Full Steam Ahead, a conference designed to empower Hurst-Euless-Bedford ISD fifth and sixth grade girls to plan for a bright future.
The conference will take place from 8:30 a.m. – 2:30 p.m. on Feb. 24 at the Buinger Career and Technical Education Academy (1839 Central Drive, Building E, Bedford). Session topics include: “DNA – Just Replicate It!,” “Robots – How does Wall-E Get Around?,” “3D-EZ,” “Photoshop – Premiere and Maya Oh My!,” “Can an Artist Be a Scientist?,” “Scratch Coding” (programming language), “Numbers and Instruments” (compose music using numbers), “We Do 2.0 – Lego’s of the 21st Century” (adding a low-energy power source to a Lego to create a robot), “Automotive Engineering Evolution from 1934” (driver Lou Marchant will bring her race car), and “Beginning Animation.”
For more: (817) 339-2020.

Newman International Academy
Newman International Academy of Mansfield brings together the best and most rigorous curricula of the East and West in a college-prep, open-enrollment, public charter school. It is a safe haven for all students, including those who transition from home schools to a regular school setting. NIAM provides a private school environment with no private-school fees. In fact, it is tuition free. Here students prepare themselves for the 21st century marketplace, civilization and wonder in the field of academics, fine arts and sports.
The small classes with their focus on excellence, innovative learning, and discipline; the dedicated and highly qualified faculty and staff, and the many co-curricular activities help NIAM students capture a passion for learning.

St. Joseph Catholic School
The students at St. Joseph Catholic School were involved in several notable altruistic endeavors during the fall. The youngsters and their families provided Thanksgiving meals to 25 area families.
Previously, they also participated in the H2O for Life Water Walk to raise money to provide for people in underdeveloped countries who don’t have ready access to drinking water.
St. Joseph’s efforts were featured in The North Texas Catholic publication, and the H2O For Life organization called the students “Water Warriors!”