My home is shrinking, or so it seems

by Kenneth Perkins
in Commentary
0 0
0

Hubby Joe loves the president. Wife Melissa? Not so much.

After a fourth consecutive “discussion” following one of those daily coronavirus press conferences on TV, the couple, five years married, parents of a set of twins, vowed never to watch again. At least not together. 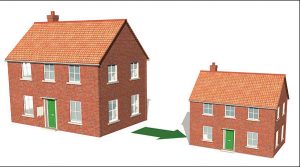 Because the small type can be important

‘My only regret is that I could not have done more’

This isn’t merely a politically unyoked union. It’s love in the age of coronavirus. And it’s why some people, in particular, are really looking forward to the ongoing commercial reopening.

Joe and Melissa were both sent home from their jobs, fortunately with pay, which was terrific since the doors to the elementary school where the twins attend closed shut after Spring Break.

“At first we saw ourselves as the lucky ones,” says Melissa. “We weren’t scrambling for childcare. And we both have jobs where we can work remotely and still get a paycheck.”

It was fun. Hide and seek in the house. Board games. An impromptu talent show where the youngest by two minutes, a curly haired little tyke named Simon, pulled off a nice little Michael Jackson moonwalk.

Eventually, the Coronavirus Shut-Ins sequestered for weeks in their 1,800 square-foot home in Central Arlington sometimes felt as if the walls were closing in.

“It’s funny,” Joe says. “Two years ago when we bought this house we wondered if it was too much room.” Turns out it wasn’t.

That’s what I’m hearing these days from folks who have been cooped up in their homes and apartments. Places big enough to play Hide n’ Seek now seem rather small.

But interesting. In a variety of ways.

I went on Facebook to inquire how things were going at home as we were coping with the new normal of semi-isolation. It’s not just love between spouses, but with kids, parents, even pets.

Josephine says her three-year-old Golden Retriever rarely leaves her side when at home, “Which I find so loving.” But that’s usually after being away 10 hours. Now she’s glued to Josephine’s hip 24/7.

“I have to say it’s a little annoying.”

Kendrick still heads off to a construction site, leaving wife Loretta at home, and the dynamic “is interesting,” he says, partly because from the time he walks in the door to the time he hits his pillow, she’s talkinglikethis.

While Loretta speaks with clients via ZOOM and cell phone, “it’s not the same thing,” she says, laughing, “and it gets a little lonely in this house.”

Yet some say there’s something alluring about being in different rooms in the same house and “meeting up” for lunch and “clocking out” at the same time to make dinner or take a walk.

Says Juanita: “With everything going on, I almost hate to say how much I am enjoying spending this time with my husband.”

Yet others find they are snapping at one another for the teeny, tiniest things. When husband, Jacoby walked into the dining room wanting to show wife Serena a You Tube Video “for the 30th time – I swear,” Serena literally put her hand up like a cop halting traffic.

Amanda and her husband have a great understanding. He works upstairs, she down.

“So far,” Amanda says, “we haven’t killed each other.”

Best line in Jean Marie’s house came from daughter explaining to sister what mom and dad are bickering about: “Dad’s hungry and mom’s over it.”

Amber didn’t have to worry much about anyone disturbing her teleworking peace set up in the spare bedroom, closing – and locking – the door, figuring that would keep her safe and sane. Then during a conference call she heard a little knock on her door (it was six-year old Sam) that turned into a bigger knock, which turned into fists pounding the door in rapid-fire fashion and the screaming of “MOMMIE!!!”

“Maybe somebody ought to get that,” one of the ZOOM talking heads blurted out.

Kenneth Perkins has been a contributing writer for Arlington Today since it debuted. He is a freelance writer, editor and photographer.