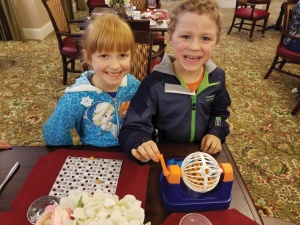 A new volunteer group has been launched in North Texas …

And while the helpers may be little, they are already making a BIG impact!

Michelle Carter and her daughters took part in a few Little Helpers events in Memphis. The group was created in “the Blues City” in 2010. According to its Facebook page, Little Helpers was designed to help young people understand the value of volunteering, recognize the blessings in their lives, broaden their community perspective and feel the sense of accomplishment received from lending a helping hand.

Last year, Michelle’s husband’s job brought the family to North Texas. And Carter brought the idea of Little Helpers with her.

“I was inspired to start a chapter here after my kids wanted to help the victims of Hurricane Harvey. We struggled to find hands-on ways they could be involved in,” says Carter. “I asked my 8-year-old if we should think about starting a Little Helpers here, and her response was a huge ‘YES!’”

Carter reached out to other moms on social media, asking if they would be interested. The response was overwhelming. Parents not only wanted to be a part of the group, they wanted to help create a new chapter.

The Dallas-Fort Worth chapter was started in late 2017 and has nearly 600 members, many from Arlington.

“I have young children, and I know my daughter will be able to help in an age-appropriate way,” says southwest Arlington resident Cecilia Briseno. “It may be making cards or separating canned goods, but we are there to serve and give back to our community.”

In the few months since it has been established, the Little Helpers sorted and organized Thanksgiving meals for Christ Haven for Children (feeding about 60 foster kids and their foster parents), they raised more than a thousand dollars ringing bells for the Salvation Army’s Red Kettle Campaign, they made 65 blankets for Project Linus, and last month they visited with senior citizens for the Valentine’s holiday.

The Little Helpers of Dallas-Fort Worth organize one to two events per month. This month, there is nothing on the calendar. That’s because they are participating in “Trevor’s 10 Random Acts of Kindness.”

Little Helpers chapters across the country are doing the same to honor a 9-year-old Little Helpers volunteer who died of Sudden Unexplained Death in Children. Trevor would have turned 10 on March 30.

The group is asking local residents to join them to honor the young boy by doing the things he always enjoyed – helping others and putting smiles on their faces. All you have to do is perform at least 10 acts of kindness through the month of March. You can post photos to the Little Helpers and/or Treasuring Trevor Facebook pages and other social media sites.

There is no age requirement to join Little Helpers.

“It’s a great way to involve the entire family and give back to our community,” says Carter. “We typically have moms, dads and kids at all our events.”

Carter says the group is not limited to one area of the Metroplex and will go where the help is needed.
For more: facebook.com/LittleHelpersVolunteers/.