Not a bad rep 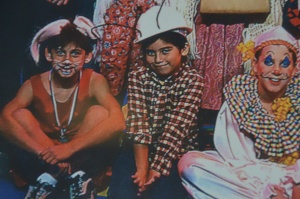 When Kirstin Maldonado first walked through the doors at Theatre Arlington she was so spunky and lively and overly eager the girl had to be hosed down.

The truth is that those who first noticed Maldonado saw something special right away: a bouncy outlier in floppy pigtails.
She had, as they say, “it.” Even at age eight. Maldonado was put on the I-gotta-do-this-or-I’ll-lose-my-mind track, which at Theatre Arlington means intensive classes, summer camp, voice lessons, acting lessons, productions, the works.

“It was clear from the start that this is something she had to do,” says Valerie Galloway, Theatre Arlington’s Executive Director.

After Martin High School, Maldonado enrolled in the University of Oklahoma Music Theatre Department but bolted early to sing with some guys on an a cappella music competition television show few had heard of. Called themselves Pentatonix. Won the competition, not to mention multiple Grammys and a huge, fanatical following.

There’s a photo in Theatre Arlington’s administrative office of about 30 kids (and then education director Todd Hart) that tells the story of this place far better than mere words. The cast pic for “School House Rock Live Jr.” shows not just a cheesing Maldonado sprawled on the floor but also a baby-faced Jennifer Stone, who would go on to star on “Wizards of Waverly Place,” Graham Galloway, now director of BarWine Comedy Troupe in New York, Dallas-based actors Parker Fitzgerald and Caitlin Galloway, Los Angeles actor Kolt Atchley, Chicago actor Alex Hardaway and Connor Lidell, a voice professor at NYU.

There are others who didn’t go into the profession but hang around because it’s in their blood, such as Kylie Reynolds, a statistician and Theatre Arlington Board Member.

It’s like an all-star team before they became all stars. It represents the true legacy of this nugget of performance art that has grown steadily and right under our noses. Not in the photo: alums like Major Attaway (currently the Genie in the Broadway hit “Aladdin”), Akron Watson (an American Idol performer who recently finished “Color Purple” on Broadway and is currently in “The Play That Goes Wrong”) and Allison Tolman (earned Emmy and Golden Globe nominations for the television series “Fargo.”

Maldonado’s Pentatonix mate Mitch Grassi was also under the tutelage of Hart (Cindy Honeycutt is the current education director).

Most don’t know that Theatre Arlington is the second oldest live theatre in Tarrant County and the fifth largest in the country. While the theatre didn’t start as youth-only, a testament to its success is a strong education program that can take wannabes as young as age four.

“That’s where we draw a lot, having been here 45 years,” Galloway says. “Talent that started as kids and have moved on in and outside the field.”

Theatre Arlington has a two-tier program – kids who don’t necessarily want to be actors or “stars” – and those who would cut off their right arm to be.

It’s a win-win, actually. Even those who don’t wake up picturing themselves on Broadway get an assortment of life skills. “It helps them whether they know what they want to do or don’t know exactly,” says Galloway.
Maldonado knew. She told Playbill’s Broadway.com recently how Broadway “has been my ultimate bucket-list goal since I was eight years old.”

Well, scratch it off now that she’s playing the role of Lauren in the long running play “Kinky Boots!” through April 8. “It’s really exciting to fulfill two dreams,” says Maldonado, who released her solo EP, “LOVE,” this past fall. “I think the most fulfilling thing you can do in an artistic career is to do all these different things. I’m so eager and excited to add all this to my rep.”

So is Theatre Arlington. And what a rep it is.