Not just a belly ache 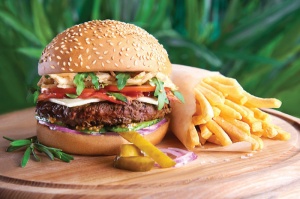 With outdoor cookouts occurring this summer, it’s easy to forget that beach-body diet and splurge on some fried chicken, cheeseburgers, and fries. But when your stomach takes your attention away from friends and family, you might be wondering, is this indigestion or something else?

If that pain usually starts after a greasy meal and is accompanied by sudden and intensifying pain in the upper portion of your abdomen, it may not be simple indigestion. You might be suffering from a gallbladder attack.

What is Gallbladder Disease?
With approximately one million diagnosed cases each year, gallstone disease is the most common gastrointestinal disorder requiring hospitalization, according to research from Johns Hopkins.

The gallbladder is a small, pear-shaped organ that stores bile, a thick fluid critical in digesting and breaking down fats. Pain from a gallbladder attack is often triggered by heavy or greasy foods.

Symptoms & Risk Factors of Gallstones
Muhammad A. Memon, MD, a physician on the medical staff at Methodist Mansfield Medical Center is a board-certified Gastroenterologist with more than 20 years’ experience. “Gallstones are commonly present in 6 percent of men and 9 percent of women,” Dr. Memon says. “However, most individuals are asymptomatic throughout their lives.”

Gallstones are hardened deposits of digestive fluid that can form in the gallbladder. According to the Mayo Clinic, gallstones can range in size from a grain of sand to a golf ball.

Dr. Memon says when patients start having symptoms from gallstones, “typically the pain is in the right upper part of the abdomen that radiates to the back. We call it a gallbladder attack.”

About 10 percent of the population has anywhere from one to hundreds of gallstones, but only 20 percent of those with gallstones will have symptoms, according to the American College of Gastroenterology. If gallstones obstruct the bile ducts, pressure in the gallbladder increases and flow of bile slows or stops, potentially resulting in abdominal pain, nausea, diarrhea, fever and jaundice (the yellowing of the skin or whites of the eyes). These symptoms require immediate medical attention as they usually indicate an infection, inflammation, or obstruction.

Researchers have identified several risk factors that can increase chances of developing gallstones. Dr. Memon says, “Gallstones are more prevalent in ages 40-69, but also in women of all age groups.” Pregnant women are especially at risk. “Pregnancy is a major risk factor due to physiological changes from hormones that cause bile to get saturated with cholesterol and form gallstones,” Dr. Memon says. He adds that obesity or losing weight very quickly, as well as hereditary factors (gallstones run in families) increase risk as well.

How to Treat a Gallbladder Attack
Methodist Mansfield Medical Center offers some of the latest technology in diagnosing and treating such attacks. Usual treatment for gallstones causing symptoms is removal of the gall bladder sac containing stones. This procedure can be done with the help of robot assistance and requires small Band-Aid size incisions, Dr. Memon says. “In some people especially after multiple gall bladder attacks stones can migrate out of the gall bladder sac into bile ducts which are tubes connecting the liver and gall bladder to the bowel. In these cases people require an endoscopic retrograde cholangiopancreatogram (ERCP) procedure to remove the stones from the bile ducts in addition to removal of the gall bladder,” he adds.

With an ERCP, doctors are able to not only find gallstones, but also remove them, if they are causing a blockage, inflammation or infection. ERCP, Dr. Memon says, uses the technology of an endoscope (a flexible, lighted scope) and combines it with the X-Ray. “It helps to diagnose and treat the bile duct and pancreas duct, as well as tumors and stones in bile ducts,” he adds.

Spyglass technology has taken this one step further by allowing doctors to remove large gallstones, which previously required surgery. “Spyglass is a special tube with a video camera, which is used with the ERCP scope to visualize the inside of the bile duct, look for tumors and break up large stones in bile ducts, which cannot be removed by conventional methods,” Dr. Memon says. Spyglass enables doctors to enter tiny areas where larger scopes cannot go. Gallstones are then destroyed by sound waves sent through a small wire, and the gallstone remnants are then removed endoscopically.

So next time those potato chips are calling your name, remember that skipping unnecessary fatty foods isn’t just good for your figure, it’s good for your gallbladder, as well.

To find a gastroenterologist on staff at Methodist Mansfield visit methodisthealthsystem.org/doctors/ or call 1-877-637-4297.