Oh, the Stories they Tell

by ArlingtonToday Magazine
in Business and Education, Community, Featured, People
0 0
0 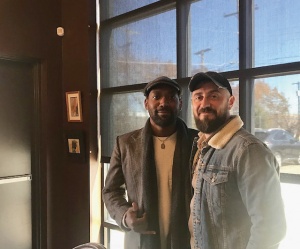 Like many Texas kids, Adam Dietrich and Elliott Gilbert II both played football, but it was their love for the arts, their community and for telling a good story that led them to form Adam and Elliott Moving Pictures.

Sitting inside Urban Alchemy Coffee + Wine Bar about to embark on a creative work session at the Downtown Arlington Public Library, the artists share how their decades-long friendship has taken them from spotlighting the plight of the homeless to that of modern day soldiers and their families.

According to Dietrich, while Gilbert was pretty good at football, he wasn’t. The two became friends when he made a joke in class one day that Gilbert thought was funny. After 27 years, he doesn’t recall the joke, but he says he’s glad that laughter brought them together.

“We met in junior high in seventh grade computer lit,” Gilbert says. “At that time, no one liked computers that much.”

While growing up, Gilbert’s father had a TV in every room, he recalls. However, he never thought of television as something he could do, career-wise, until later. A family friend had also taken Gilbert to museums, which he enjoyed. But it wasn’t until after attending a Creative Arts Theatre and School [CATS] party with Dietrich, and interacting with the arts community, that Gilbert began to think about television, theater and film more seriously.

“I thought, man, this is not how we are in sports,” he says while sporting a grey, tweed director’s cap. “I’m like, hey, let’s continue making art.”

Dietrich had attended CATS since grade school, which along with a 10-year apprenticeship at Hip Pocket Theatre and his University of Texas at Arlington connections, helped him form lifelong friendships and mentorships with people he describes as open- minded, liberal, artsy-types.

“Being interested in the arts was as foreign to people as Quantum Physics in the ‘80s,” he says. “And there was a certain derogatory element to it as well. [But] we’ve always wanted to create original work from day one.”

At Martin High School, their class was encouraged to write an original play, so they helped create “Bluestreets,” which raised several thousand dollars for a woman known as “the Chicken Lady,” who was known for spending her own money feeding the homeless.

“And we chose to stay in DFW when we were, you know, 19, 20 years old and build careers here,” he continues, explaining how the local industry and environment has changed over the years.

Dietrich says that a decade ago, Arlington films seemed to focus more on Christian families or horror and stories that would bring a more likely guaranteed return on investment. He notes that there has been a shift from specific genres. A revolution in the industry has also given indie films a bigger place in the market.

“Art communities have grown leaps and bounds with equalities and inclusion,” he says. “But in the ‘80s, you know, we had a very conservative and very specific leadership. And it made it very hard for people that were different than that or on the fringe of that. As the community has grown and we’ve invited more and more diversity in our communities, and our businesses, and our beliefs, that’s fed into our art.”

“If it’s humane, you go out there and you do what you can within the industry because the industry is going to be as much part of your art as your art itself,” he says. “It is one large family, I think, theater and film, and so you’ve got to contribute to the family.”

Dietrich, who has worked in the arts his entire career, likens Arlington’s revitalized Downtown to Fort Worth’s Fairmount District and Dallas’ Oak Cliff, which “have similar opportunities for young, energetic, entrepreneurial efforts that everybody loves.”

Dietrich and Gilbert have partnered in several ventures themselves, including a non-profit theater, Butterfly Connection, Connectivity Media and Seraphilms. They launched Adam and Elliott Moving Pictures in 2016 to help people tell stories the way they would tell stories.

“After so long, we know what our skill set and our vision is,” Dietrich says. “And we started doing that on the daily. It was kind of a stake in the ground, in a way.”

Dietrich says their work raises the big questions that people ask at night when they’re all alone.

“Knowing,” a short film about a janitor who witnesses a sex crime, premiered recently at Fort Worth’s Lone Star Film Festival and simultaneously in New York and Georgia.

“It’s not an easy movie to watch,” Dietrich says. “But, hopefully, something that inspires conversation about a very tough topic.”

Their work can also be seen in Andrew Patterson’s “The Vast of Night,” which world premieres this month at Slamdance.

“A Soldier’s Way,” which follows two soldiers and their spouses as they struggle with the impacts of war, will also screen in 2019.

Dietrich says that, in an effort to stay true to soldiers and their spouses and their experiences, they consulted with the PTSD [post-traumatic stress disorder] Foundation for the movie. They had wanted to film in Afghanistan, but their budget kept them in Texas. They shot the film in Terlingua.

“For anyone that hasn’t been there, it’s this big desert landscape,” Dietrich says. “It’s prehistoric. The places that people live are not typical American spaces, so everybody’s got a very individualized living experience in Terlingua. It’s completely kind of off-the-grid living.”

Dietrich talks about a soldier who had videotaped himself over and over again during war and uploaded his videos to YouTube.

”There’s a battle going on, and he’s selfie-ing himself, and his guys, and talking about it,” he says. “And then he’d upload it. And then he’d get back to fighting. We’re, like, that’s amazing and frightening and an incredible statement of the power of technology.”

Their team camped during filming in what Dietrich describes as a modern teepee with concrete floors and electrical outlets but “where you still wake up with a spider in your mouth.”

“Everything ended up being magical,” he says.

Dietrich says at the end of their journey, while eating at a Mexican Restaurant, a Vietnam Veteran, whom the film crew had befriended, expressed how important it was that they came.

“God created the desert to test the faith of men,” the man told them. “And I think you passed.”

Then they all left and drove home.

“It was so perfect,” Gilbert says. “[What he said is] going to be on our poster. It defines the movie.”

Gilbert and his wife, Juri, live in Arlington and have two children. Dietrich and his wife, Andee, live in Fort Worth and are expecting their second son this month.