On a hot streak 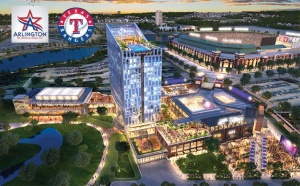 Even before it opens later this year, the world-class Texas Live! development captured the Journal’s Best Real Estate Deal of 2017.

DBJ describes the occasion like this: “The 26th annual event was hosted at The Ritz-Carlton in Dallas on April 11, and showcased the results from our judges’ picks for the top transactions and developments in North Texas for 2017.”

In explaining the award on their website, they highlighted the Arlington project with superlatives bound to give rise to an already heightened sense of community pride throughout the city.

“Arlington’s massive project, Texas Live!, picked up top honors as the Dallas Business Journal’s Deal of the Year. The multibillion-dollar project will consist of a new ballpark for the Texas Rangers and entertainment district once completed. The developer, The Cordish Company, alongside the Texas Rangers Baseball Club and City of Arlington hope to make Texas Live! a destination with or without a baseball game with amenities like a Loews hotel and restaurants open for lunch and dinner.”

They quote Cordish Chief Operating Officer Zed Smith saying, “The whole purpose of this development is to position Arlington as a world class destination for conventions and visitors.”

But that’s not all the attention the exciting project received at the event.

It also won the Best Real Estate Deal in the Sports and Entertainment category. Featuring more than 200,000 square feet of best-in-class restaurants, retail and entertainment venues and anchored by the 302-room luxury hotel Live! by Loews with a 35,000-square foot conference center, the project dominated the evening.

The origin of all this excitement about what’s underway in the city’s Entertainment District can be directly traced to the quintessential Can-Do spirit of the people of Arlington. By a 20-point margin of victory, voters said “yes” to the new Globe Life Field set to open in 2020. All the rest stems from that decision.

Then, across the highway from the massive General Motors Assembly Plant, the emerging $278 million Arlington Automotive Logistics Center on the grounds of the former Six Flags Mall won the DBJ’s Best Industrial Deal honor.

This project includes two warehouses with a combined 1.2 million square feet of industrial space for the GM plant’s suppliers.

You can see the UPS Regional Hub’s 1.1 million square foot facility nearing completion on the south side of Interstate 20 next to the Summit Racing Equipment’s massive new development. It, too, was a finalist in the Best Industrial Deal category.

And, finally, the opening of D. R. Horton’s office headquarters on Interstate 30, the Fortune 500 company that is home to more than 400 employees, was a finalist in the Best Land Transaction Deal category.

When you add up all this corporate investment of more than a couple billion dollars and the thousands of jobs that are being created, it’s logical to conclude that Arlington is enjoying an ascendancy in quality growth unlike anywhere else in the region.

Consistently committed to a policy of “Investing in Our Economy,” the city councils of recent years have led the initiative to achieve the kind of results we are now seeing across the city. Receiving recognition from one of the area’s premier business media organizations is strong support for the city’s business and political leadership that are pursuing a course they believe best serves the citizens of the city and results in a higher quality of life for all its residents.

Perhaps icing on this most recent round of accolades is the promise of more to come. “We’re obviously excited and pleased with the DBJ awards. It’s always a tribute to our citizens when something like this happens.” Mayor Jeff Williams exclaims. “But, stand by for more good news about what’s ahead for the American Dream City!”