One size doesn’t fit all 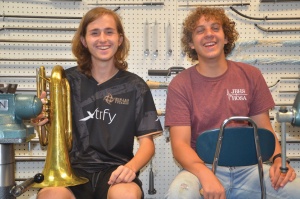 Vincent Rustigian is a tinkerer, which is fine by him, seeing that he was never much of a math whiz or science nerd or academic competitor fretting over graduating class placement and on which college should he focus: Stanford or Harvard? He liked to work with his hands, pulling things apart, putting them back together and pulling them apart again.

This doesn’t mean he wasn’t a mind guy, since yanking parts out of a clock radio at the age of 10 takes some kind of imagination, perseverance and fortitude; putting it back together takes gifted brainpower.

So it was with Vincent and others like him that they have thrived under this new push of career and technical education (CTC) that prepares high schoolers for skilled-trade fields like welding, animation and cosmetology. Back in my day it was limited to, say, woodshop and auto shop; the classes were full of testosterone expressing little need for algebra or, for that matter, Stanford or Harvard.

No wonder vocational education – which it was called then – carried a snobbish stigma. These were the kids who supposedly couldn’t survive the academic grind of high school and college, which means they would not land a good job, or marry up, or reside in some gated community. No, these were the fringe folks fixing our cars and doing our hair. Needed, sure, yet conveniently invisible along our social and cultural sphere.

Well, that’s certainly changing, thanks in part to the widening college gap, where insane tuition awaits, and there’s no guarantee of getting into that gated community once you bag that Bachelor’s, anyway.

It has led to the rise of junior college attendance and an attempt to cap the massive after-college debt (student loan borrowers now graduate with an average of $37,000, which represents a 20-percent down payment on a $185,000 home) and reconsider the financial sense of a college education.

Arlington ISD, with its massive Dan Dipert Career & Technical Center, and Mansfield ISD, with its Ben Barber Innovation Academy, understand this. They have bought into the prospect that not all students ought to, or want to, be collegians, so therefore offer alternatives that are educational and life choices.

Sayuri Galvan is on track to acquire her Texas Cosmetology Commission State Operator License next year in AISD’s Cosmetology program, yet the Sam Houston senior isn’t quite sure whether she will go to college, work at a beauty shop, or “do my own thing” in opening her own shop.

That’s the idea, says AISD Superintendent Dr. Marcelo Cavazos. He might have pushed for the district’s academic core-heavy collegiate high school, where students graduate with associate degrees and enter universities as juniors, but career education has been just as much a priority by “giving students the tools to be successful in whatever endeavors they pursue.”

In fact, 13 new courses, including video game design and precision metal manufacturing, will this year join CTE courses such as architectural design, audio and video recording and the popular police and fire academies. How far we’ve come from woodshop.

MISD will offer, in the spring of 2019, a drone course through its Aircraft Technology program that will focus on obtaining skills to become a commercial drone pilot.

Cavazos and MISD Superintendent Jim Vaszauskas are PhDs at the top of the academic food chain but know that finding connections between coursework and career goals makes school relevant.

Brett Miller said as much after he, too, repaired, inspected and tuned wind, string, percussion and wood instruments during an internship. He can’t remember how many times in other classes he asked the proverbial “When are we ever gonna use this?” question.
After taking his skills into a professional setting – and getting paid for it – that sort of question was suddenly moot.