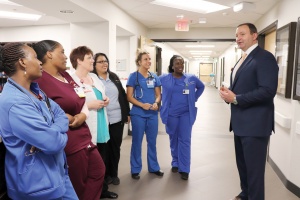 There is a daunting, perpetual challenge facing Keith Zimmerman, the CEO at Medical City Arlington: What’s the best way to lead the medical team and support staff at a hospital, where constantly changing norms represent the only norm?

Today’s groundbreaking curative advance is tomorrow’s “old school” medicine. Revolutionary technology, no matter how significant it is, has a shelf life. Likewise, patients’ expectations – if they aren’t met at your medical center, they will be met at another.

Zimmerman, who began the job in April 2017, is amply equipped for the leadership role with which he is tasked. He has spent more than two and a half decades in the health care field and served seven and a half years in leadership roles in the Medical City Healthcare system.

A former college football player at the University of Louisiana Lafayette, he is wired for the competitive nature of the health care industry. And, as a family man married to Kim and father of sons Charlie and Zack, he can empathize with those who enter the doors of his facility – whether it’s the Emergency Unit door, the Operating Room door, the door to a room in the Women’s Center, or the Chapel door.

The photographs on this and the next page weren’t staged. Zimmerman routinely engages with staff and patients. He studies the latest “this” and the cutting edge “that” to help the hospital find what best serves patients. He consistently confers both with administrative peers in the Medical City Healthcare family and with noted leaders in other fields, picking their brains to find out how he and his team can achieve the goal he puts ahead of everything else.

“Above all else, we’re committed to the care of human life,” he says. “We’re gratified to be a member of this community, serving the Arlington, Mansfield and Grand Prairie healthcare needs. And we are constantly trying to improve the quality of service we provide to our patients.” 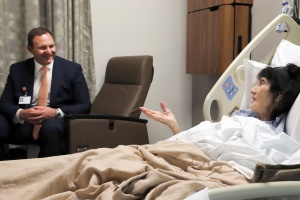 You don’t have to look far to see how hard Medical City Arlington is trying. The most notable example of progress “in progress” is the evolving construction site representing what will be the revolutionary $60 million Women’s Hospital that is set to open in April 2019.

Medical City Arlington currently delivers more than 4,200 babies each year. With increased capacity in the new Women’s Hospital, the facility will be able to accommodate more than 5,800 births annually.

“Our vision,” Zimmerman says, “is to create a destination center for women, where they can be cared for in one area.”

Medical City Arlington continues to improve the way it serves patients elsewhere, as well. Here are some highlights:

Meanwhile, as the patients benefit from the various ongoing enhancements to and achievements of the hospital, Zimmerman has made a priority to “take care of the people who take care of people.”

“Our vision is to be the hospital of choice both for patients and physicians,” he says. To that end, Medical City Arlington partners with physicians to create a physician-led, professionally managed health care center. “That partnership ensures that our patients receive the best care possible,” Zimmerman says. “That’s always our goal.”

Part of reaching that goal also includes interaction with staff. “One of the most fulfilling hours of my week is when I get to go to different departments for our reward/recognition ceremonies for different employees who’ve done something special,” he says. “I like to say, ‘let’s catch people doing something good.’ We do that in a different area of the hospital every week.”

All of these parts – the inspired leadership, the ongoing physical and technological advances, the focus on those receiving care and on the caregivers – have rendered a Medical City Arlington that, indeed, meets Zimmerman’s primary goal of providing an unwavering commitment to the care of human life.

“In 1976, when the hospital started, it was primarily a small community hospital,” he says. “Fast forward to today, and we’re a large, tertiary care hospital with 24/7 critical care intensivist staffing, allowing us to provide a higher level of care than ever before. I like to say that we have all the services nobody wants. But they are very glad we have them when they need them.”