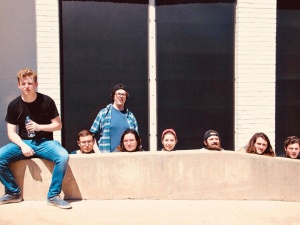 There are those who insist that improvisational comedy isn’t comedy at all, that it is merely a collection of chaotic, often incomplete thoughts stitched together like an unfinished quilt that doesn’t seem to have a concrete beginning, middle or end. Sort of like a bridge going nowhere. I disagree. Having watched improv over the years in places like Chicago and San Francisco, I must concur that it is a particularly different kind of art form, though not simply because it involves performers thrust into hypothetical situations armed with nothing more than suggestions offered up by an audience.

It’s a matter of control. Our own, in fact. We don’t know where the story, if you want to call it that, is going – and neither do the performers who are working with no scripts, no rehearsal and no safety net, so to speak.

This is what makes improv so exhilarating, and when talking about it with Associate Professor Joe Chapa, who teaches the craft at the University of Texas at Arlington and heads up the Flight 12 Improv troupe, you can see that elation plastered across his face.

If you’ve ever caught an episode of Who’s Line Is It Anyway, it’s like that, basically, except there’s a different sort of tension involved when the performers are right there in front of you, live, in plain sight.

Imagine, as Chapa put it, someone saying to you, “okay, you’re a potato or a piece of bacon. Go! You have to create a story right then and there.”

On Feb. 8 and 9 at UTA’s Main Stage Theatre, Flight 12 Improv will be right up front, in plain sight again, performing its spring show, which has a formal name, though Chapa didn’t seem all that definitive on what it actually is. “Spring show,” he tells me one day from his office tucked away in the Fine Arts Building. “That sounds about right.”

Flight 12 has about 16 members, many of them theatre geeks, but other majors are sprinkled throughout. This troupe has gained quite a following the past few years, although they have been around since 2008.

A lot of people don’t understand or appreciate how difficult improv is, partly because you have to be able to create genuine, funny moments out of thin air. It’s often quite fast-paced, and the best of its kind is equally part ridiculous, heartwarming and a little weird.

“True, if you haven’t done it before it can be a little nerve racking,” says Chapa, who spent his undergrad years at UTA before logging graduate time at the University of Mississippi.

Flight 12’s performance often includes up to three story lines, depending on how it’s going; these things tend to take on lives of their own. They train four to five hours a week, more leading up to performances, which helps in the long run.

“When you get to know how everyone works,” says Chapa, “it’s so much easier to create together. It’s not just an acting tool but to make people laugh, to smile, to think.”

The humor isn’t cheap, bathroom stuff; a lot of it is based on current events and politics. “They are expected to do research and know what’s going on in the world,” Chapa says. “Only then can you make fun of it.”

As for the name, well, that’s about as unstudied as you might expect.

According to Chapa, they were brainstorming for a name when a frustrated member blurts out, ”I’m going to open up a Google page and whatever is the first article, that will be our name.”

The article was about a flight, Flight 12, in Indiana, forced to make an emergency landing to toss off luggage since it was carrying too much weight.

Perfect, Chapa thought of this impromptu, improvised move. “It stuck.”