Renewed reflection on the 1918 flue pandemic

It was almost four and a half years ago that I shared in this space my personal connection with the 1918 Flu Pandemic that altered the course of history. 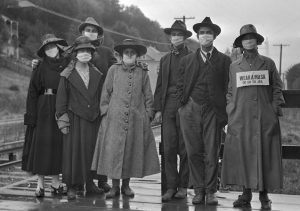 With what we all have been going through with the onset of the Coronavirus, it caused me to reflect again on what my grandparents and their family members who lived in a South Alabama farm community of about 500 persons at the time were experiencing.

The outcome for them in the midst of something so profoundly worse than we are facing today provides perspective and hope that we will come out of this. If our fellow citizens more than a century ago with far less medical and economic resources than we have today ultimately recovered, so can we.

Here’s how the Journal of American Medical Association described the 1918 experience:

“The year 1918 has gone: a year momentous as the termination of the most cruel war in the annals of the human race; a year which marked the end, at least for a time, of man’s destruction of man; unfortunately, a year in which developed a most fatal infectious disease causing the death of hundreds of thousands of human beings. Medical science for four and one-half years devoted itself to putting men on the firing line and keeping them there. Now it must turn with its whole might to combating the greatest enemy of all–infectious disease,” (12/28/1918).

An estimated 675,000 Americans died from the Influenza Pandemic of 1918 – 10 times as many that would lose their lives in World War I that ended that same year.

My grandmother, the oldest among her siblings, gave birth to my father that year – the sixth of her seven children.

Two of her sisters were in school in a small Southern Alabama town about 35 miles from where she, my great grandmother and the rest of the family lived pursuing the lives of cotton farmers.

It was from there that the urgent letter of December 6th was dispatched via “Special Delivery” that added 10 cents to the usual cost of postage that year.

Even then it took five days for the correspondence to make the 35-mile trip.

The one-page letter to my grandmother from her sisters revealed the urgency for the help they needed growing from the fear of becoming infected with the flu that had sickened others in their school.

They pleaded for their sister to intervene with their mother to “send a car” to pick them up and bring them home.

The letter explained that the headmaster of the school “ …  will not let us go on the train,” (no one could ride a train anywhere without a doctor’s certification that they were not sick).

“We could stay here but it would cost 70 cents plus medicine if we were to get the flu, so you can see why it would be wise for us to go.”

“She had better write a note and send by whoever comes for us …  we want to come home.”

A post script was added on the back: “We have just heard we would have to pay a nurse $35.00 per week if we get sick so please send for us.”

The particular strain of the disease was devastating for 15 to 35-year-olds, resulting in a death rate 20 times higher in 1918 than in previous years. Physicians of the time were helpless against the powerful agent that led to some dying within hours of developing the flu.

No wonder my great-aunts, teenagers at the time, wanted to come home. Where they felt they would be safe in frightening times.

As awful as it all was, recovery then produced what became the “Roaring Twenties” and provides reasons for optimism for us today.

The nation’s total wealth more than doubled between 1920 and 1929 as economic growth swept many Americans into an affluent society.

We should expect history to repeat itself as we safely and securely move into better days just ahead.

Richard Greene served as Arlington’s Mayor from 1987-1997 and currently teaches in UT-Arlington’s graduate program of Architecture, Planning and Public Affairs.