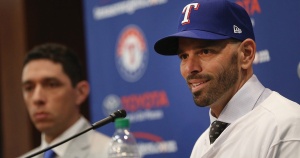 If you are one of the many that do New Year’s Resolutions, Good Luck! And, I’m sorry! Sorry that, as you read this, you feel bad because we are not far into the year, and your resolve is already waning. I get it! It’s one of the reasons I stopped doing resolutions years ago.

Back in 2003 when Bill Parcells took over as coach of the Cowboys, he famously uttered the words, “You are what you are.” He was referring to the back-to-back-to-back Cowboys teams that had endured 5-11 seasons.

That day, the light bulb went on for me. I realized that I was never going to be a scratch golfer, or run a marathon in 3:00 hours or make it to the big leagues. (Kind of sad that I was in my early 40s and still dreaming of playing major league baseball, isn’t it?) But I realized, that like the Cowboys of 2003, I wasn’t built for it.

Parcells concluded that the Cowboys were built to be no better than 5-11 and then spent three years changing the way the team was built. A seed was planted as Parcells preached the Gospel of football: you build great teams from the inside-out. And sometimes, that means making drastic changes.

It took a while for Jerry Jones to fully buy into this mantra, but – low and behold – this year we see the fruits of a team that was built exactly that way. Anchored by Tyron Smith, Zack Martin and Travis Frederick, when healthy, this line opens the holes for Ezekiel Elliott. This line has helped the Cowboys become the best running team in football.

On the other side of the ball you will find a front seven that is, arguably, the best in football. It includes DeMarcus Lawrence, Tyrone Crawford and Randy Gregory on the line. A linebacker corps that is as good as the Cowboys have ever had: Sean Lee, Jaylon Smith and rookie of the year candidate, Leighton Vander Esch, has helped make life good for the secondary. Byron Jones, Chido Awuzie, Xavier Woods and Jeff Heath are so much better because the front seven put so much pressure on opposing quarterbacks.

The lesson is that the Cowboys have achieved this level of success because they made a drastic change. No longer are they only drafting offensive players. No longer are they only drafting skill position players. They are building from the inside out, and there is no better example of the success of that plan than the 2014 draft. Jerry Jones wanted to make a splash with a skill position player and a Heisman Trophy winner from Texas. His son, Stephen, wisely talked Jerry out of Johnny Manziel and into an interior offensive lineman named Zack. Four years later, Zack Martin is a perennial All Pro, and Johnny is out of the league.

If you want to achieve your goals, if you want to keep your resolution, you must change from the inside out – and sometimes that means doing something drastic. The Rangers are going through a process like that right now. To his great credit, Jon Daniels has concluded that much of the front office operation should be overhauled. So some of the biggest changes to your favorite baseball team will be among management … for now.

The new manager, Chris Woodard, is from the LA Dodgers organization, a team that has been to a World Series in back-to-back years and is considered a leader in the new age of baseball. In addition, they hired Shiraz Rehman to be an assistant to JD in the front office. Rehman spent seven years with the Cubs in a similar capacity, and it was during that time that the Northsiders went from being “lovable losers” to World Series champs.

JD’s drastic changes are underway. He has previously promoted from within, and that is a noble approach. But he realized that by doing so he was promoting people who had the same philosophy and approach that he did. So, JD made a drastic change in the way he hired. He has new blood, new ideas and a new approach as he attempts to rebuild the Rangers. Will it work? Time will tell. But history shows that drastic changes yield drastic results.

As for me, I will not become a scratch golfer unless I start playing every day and working hard at improving my game. I will never run a three-hour marathon unless I train like a crazy person. Frankly, I don’t have time to play golf everyday or train like a crazy person. I spend too much time and have too much fun covering these Arlington teams. It’s a new year … Go Cowboys! Go Rangers!