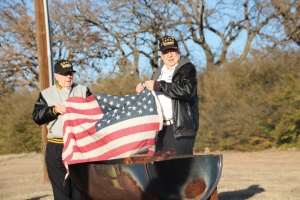 The United States Flag Code states, “The flag, when it is in such condition that it is no longer a fitting emblem of display, should be destroyed in a dignified way, preferably by burning.” Some people will say that you must do it this way or that way, but according to the Flag Code, it just needs to be done with dignity.

The Boy Scouts of America and the American Legion are the only two organizations officially sanctioned to retire American flags.

Scout leader Corey Callaway says he and fellow local scout leaders inherited a large volume of flags to retire from the now-closed Nuts and Bolts Hardware store. “Scout troops retire flags at various campouts from time to time,” Callaway says, “but [retiring] the sheer volume of flags on hand would never be accomplished unless a large number were to be retired at the same time.” 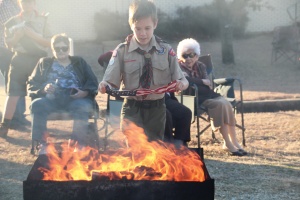 The scouts used six troughs to retire the flags. One flag was formally and respectfully retired. “Then,” Callaway says, “one by one the rest of the flags were retired. There were flags of all sizes, including one very large flag that flew over an auto dealership. We also retired many Texas Flags, one Christian flag and a flag representing all military branches with the Quote ‘We support our Troops.’”

Callaway says the event was very moving. “[Scout] Adam Raschio led the ceremony,” he says, “and surprised everyone when he led and belted out ‘God Bless America.’”