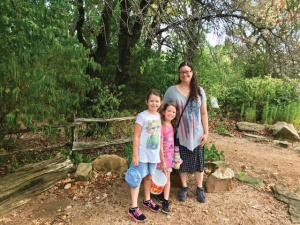 A mid-morning mist is settling over Veterans Park when Joy Vincent arrives with her two daughters, both clad in kitty T-shirts.

Last year, the 33-year-old founded Arlington Rocks, a 2,000-plus member Facebook group dedicated to painting, hiding and hunting rocks across the city.

Vincent, who first became acquainted with the pastime through Mansfield Rocks, explains that people can keep rocks that they find and like. However, the idea is also to paint rocks and hide them.

“Mommy, I hid them all,” says 6-year-old Ellie, returning with an empty plastic pail.

“I found a tree that had a little hole just for a rock,” she clues later.

Sealing the painted rocks is important because it preserves the artwork from weathering effects, Vincent says. And there are some rules to remember, such as not placing the rocks where someone might trip over them, and not gluing on extras like eyes, beads, gems or other items that could fall off and harm wildlife.

Some good places to hide the rocks are around trees and playgrounds, Vincent says, but “you don’t want to leave them out in the middle of a field or something where lawn mowers might hit them.”

“Some people get possessive of their rocks,” she continues. “But once you leave it, [the rock] doesn’t belong to you anymore.”

While the group doesn’t encourage rock “hoarding,” Vincent says there are a few rocks that she has found and kept that have special meaning to her. For instance, after starting the group she found a stone with a black cat painted on it that said, “you rock.” It was a keeper.

Keith Higham, who sometimes walks his dog at Veterans Park, also found a painted rock near his truck in December.

“His wife had passed away a year before,” Vincent says. “And the rock was a deep purple with a cloud and a smiling figure waving behind it. In silver lining the rock said, “our loved ones are always close.”

Vincent, a stay-at-home mom who homeschools her daughters, says it’s fun to see the work of emerging artists but points out that some of the group’s members have formally studied art.

“It’s pretty fun painting [the rocks] and making up designs,” says 9-year-old Jules, who shares how she was given some art books for Christmas that taught her the techniques of hatching and crosshatching.

“I made a mermaid and a seashell,” she says. “And I did a diamond.”

Some members of Arlington Rocks also pick up trash around the city’s parks while rock hunting. And others in the community are getting involved, as well. Barnes and Noble bookstore hosted a rock painting day, Vincent says, and Mr. B’s Burger Pub has created a rock drop spot where people can take rocks to paint or leave painted rocks for others. Sublett Road Baptist Church also maintains a rock drop area.

“It’s good to get out and play,” Vincent says. “The rock group has made me feel more connected to my community and also helped me shape my leadership skills.”