Safety, just a few feet away 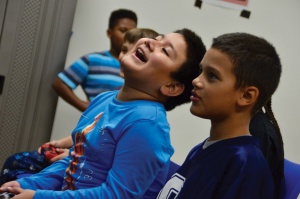 Eddy Peach, the recently deceased fabled coach and educator whose name is affixed, along with that of his wife, Debbie, on a marvelous two-story Arlington ISD school building on the northeast side of town, was standing alone during the dedication ceremony around this time last year. He was contemplating something, so I asked what, and he just smiled. He muttered something about “opportunities” and strutted away, teary eyed it appeared, at least from my vantage point.
Why not? It was an emotional day for Peach and his wife, both of whom had – and have, what with their children having taken up the family business at various schools and districts – given so much to education without asking for anything in return other than your best shot.
Standing in the same spot just a few weeks ago I was hit with a theory on why the tears. Why the emotion. Why big, tough Eddy Peach was seemingly weak kneed. It was the Boys & Girls Clubs facility tucked inside Eddy and Debbie Peach Elementary.
Eddy Peach, who passed away just a month ago, was a common sense coach known for taking little and making lots so the kids he envisioned trekking through the Boys & Girls section probably choked him up a bit knowing what it truly meant.
No one was in the 7,000-square-foot space; it, too, was still a bit under construction, but the elements of what it would be were there. Perhaps he saw kids running and talking and doing and, most of all, being safe.
We often forget that the Boys & Girls Clubs started when three women unnerved by the boys in their neighborhood running the streets (and getting in trouble for no other reason than boredom) wondered if they had a better place to spend their time. This was in Hartford, Conn., and the women were, I suppose, merely being mothers looking out for the welfare of those around them.
Thus began the Boys & Girls Clubs (BGC) of America, which then and certainly now wanted to be a way station for those roaming minds, giving them something to do after school. It was for boys then, but would expand to girls, with the objective of improving behavior and increasing their personal expectations and goals.
Having a BGC inside a school is a big deal, because many kids can’t go to a BGC without transportation. The rather distinctive partnership between Arlington ISD and BGC of Arlington to put a full-fledged after-school center inside Peach Elementary was a bold and rather ingenious move.
If you can’t get the kids there, bring it to the kids.
Arlington ISD Superintendent Dr. Marcelo Cavazos was quick to sign off on this project, knowing how “the vision of the Boys & Girls Clubs of Arlington aligns with the district’s mission and provides students with access to academic, healthy lifestyle and character programs.”
The additional space was funded by the BGCA with a matching grant from the Arlington Tomorrow Foundation. During a visit, I noticed kids playing sports, doing schoolwork, just being. Right now, it’s a marvelous mixed-use space serving some 200 students, including junior high kids from nearby Nichols.
I often think of BGCA as this anonymous entity we take for granted; we drive by their spaces and think little of it, unless, of course, we’re pulling into the parking lot to pick up our kid(s).
Yet my theory on the whole Eddy Peach emotion thing is that he saw kids on the fringes being helped right there at the school with his name on it. All they had to do was walk out of their classroom, go down the hall, and open the door.
What little effort for something that gives back so much.