Shared experience deferred: Here’s a classic Rolls that very few people have been able to see

by Richard Greene
in Community
0 0
0

When Steve Laird and his Rolls Royce finally get to circulate, those he visits will see a car with meticulous craftsmanship and a keen attention to detail.

Imagine becoming the owner of a vintage Rolls Royce built for an Italian Baron to exacting specifications that make it one-of-a-kind. Then, imagine circumstances occurring that suspend the opportunity to describe its provenance to fellow Rolls enthusiasts, and you would be sharing that disappointing experience with local attorney Steve Laird.

Steve acquired this 1958 Rolls Royce Silver Cloud just over a year ago – at about the same time the national coronavirus pandemic was taking hold of the country.

“There are local Rolls’ clubs, one in Dallas, another state-wide, and nationally. I joined them all and was looking forward to meeting fellow owners, participating in shows and road trips and, understandably, all of that had to be canceled,” he laments when describing what has happened. 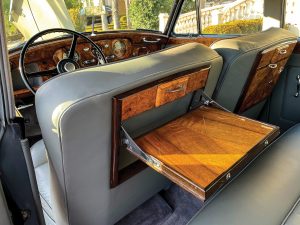 “I am anxious for those to pick back up, but I’ll just have to wait. Those clubs include owners of Rolls automobiles that comprise ones that are older, some much older, and newer than mine.”

Many of those owners also have great stories to share along with their special collections. Steve’s, however, will be hard to top.

In addition to his Italian home, the Baron had another in Los Angeles in 1958, and the first requirement he had was for the steering wheel to be located on the left side so he could properly navigate the byways and freeways of California.

A long list of details was penciled in to suit his preferences, including factory-installed air-conditioning that still works more than 60 years later. That feature itself makes the car one of only 35 that Rolls built that year providing such comfort to its owners.

The reverse button on the “column quadrant” was to be deleted; shields for the door locks; rear-room increased capacity; coat hangers; a “made in England” badge; and, for the floor of the trunk, an exclusive lambswool rug crafted by the 100-year old English Morlands rug maker rounded out the extensive features not shared by the famous car maker’s other Silver Clouds of the time.

In my visit with Steve, he produced two large three-ring binders containing the original parts descriptions by number of every single screw, nut, bolt, and every other part that went in to assembling the car.

Such a resource makes it possible to maintain the original condition of the car when refurbishment or refitting of any detail is required to keep the car like new. The most dramatic example of this outcome is found in the interior woodwork of the dashboard, side panels and fold-out tray tables in the back seat.

To achieve such results when those features were replaced, the woodwork was imported from England to ensure its authenticity. 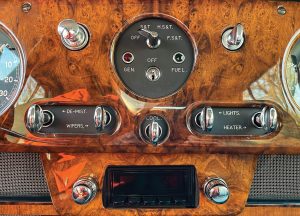 The engine in the ’58 model is a six-cylinder unit with twin carburetors producing a top speed, according to the British Motor magazine, of 103 miles per hour, acceleration from 0-60 in 13.5 seconds and a fuel consumption of 14.5 miles per gallon of gasoline.

Interestingly, the following year, Rolls offered an 8-cylinder version, the Silver Cloud II, but if you wanted one of these, you would have to remove the right front wheel to change the spark plugs.

The larger engine was a bit cramped in the engine bay, as you can see from the photo here of both the bonnets raised (we call them hoods in this country) to reveal the powerplant and all its attached equipment.

There’s a lot to share about this remarkable example of Rolls luxury in a car built for an Italian Baron, and Steve is ready to do it as soon as he can. In the meantime, he says with a bit of longing, “I enjoy driving it short distances around the neighborhood and a little beyond.”

He also has those stuffed three-ring binders to memorize some of the parts numbers so when he is talking to other Rolls owners, he can impress them with how deeply familiar he is with all the details of his.