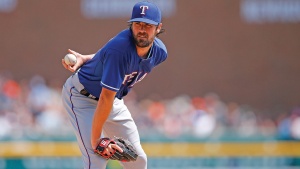 The trucks are rolling, the dirt is moving, and the future is taking shape for the Texas Rangers. I am not referring to the hole in the ground that will become a state-of-the art stadium soon enough. The trucks are pick-ups – most players have at least one – and the parking lot in Surprise, Ariz., is full of them.

The dirt is moving on the backfields at the Spring Training home of the Rangers. The entire team has convened there to busily prepare for the future. In fact, the future begins later this month. For the first time in recent memory there are not one, not two, but three regular season games in March. The World Champion Astros will be here for a four game series to open the season beginning March 29.

With that in mind, the next few weeks will be very important for this Rangers team that enters the spring with more question marks than it has had since 2015.

Like most teams, the biggest questions are on the mound. It always starts with pitching. When Yu Darvish and Cole Hamels were paired together for the last couple of years, pitching was always considered a strength. But Darvish was traded to LA ahead of his free agency, and Cole is trying to outrun Father Time. Still, there are plenty of teams that would take an aging Cole Hamels at the top of its rotation.

His experience, intelligence and work ethic are second to none in MLB. His generosity is remarkable, too, after he and his wife Heidi gifted their 32,000-square-foot mansion in Missouri to a charity called Camp Barnabas. That is just one more reason to root for Cole to have a great year.

Behind him will be Martin Perez. That is, once his elbow heals – he had an off-season accident on his ranch in Venezuela. He was in a pen with some bulls and one of them moved in a way that startled Martin, he fell and fractured the elbow on his non-throwing arm. He still hopes to make it back for opening day; team officials think he will miss a month. Whenever he gets back, he will go right into the rotation. If the winter proved anything it’s that he has no business in a bullpen.

That is 40 percent of the rotation; the other 60 percent will be composed of guys with lots of upside: Matt Moore, who comes from San Francisco but has fond memories of beating up on the Rangers when he was a youngster in Tampa Bay. Doug Fister, a 6-foot, 8-inch right-hander who went 40-25 during a three-year stretch from 2012-14. Mike Minor who, like Perez, wants out of the bullpen. He was used out of the Kansas City Royals pen last year. He had 88 strikeouts in 77 and two thirds innings. He had six saves and an era of 2.55.

Another experiment of the spring will be Matt Bush. One of the best stories of 2016 will try his hand at starting this year, too. Add A.J. Griffin and Chi Chi Gonzalez to the mix, and the Rangers have some depth at starter going into spring training.

The bullpen will be anchored by Jake Diekman, Keona Kela and last year’s pitcher of the year Alex Claudio. Bush, and Minor could spend time there, as well. Bullpens, as we have learned many times in the past, are always a work in progress.

The late, great Rangers’ announcer Mark Holtz used to say, “It’s baseball time in Texas,” and that time is nigh upon us. Very soon those trucks, the pickup trucks, will be rolling back to Arlington. The dirt will be moving on the field at Globe Life Park for the second-to-the-last season in that glorious park. The new season starts with spring training this month. The last time there were this many question marks was 2015. Oh by the way, the Rangers won the AL West in 2015.