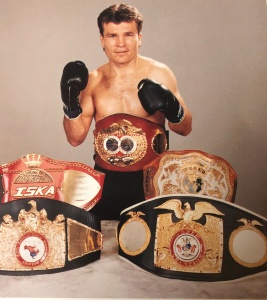 Troy Dorsey started taking karate lessons when he was 11 years old after getting bullied at school. After earning two world boxing crowns, four world kickboxing titles and a world karate championship, no one picks on Dorsey anymore.

“I was small for my age,” says Dorsey, 55, who stands 5-foot-5 3/4. “Back then we just fought back. I started taking karate between the fifth and sixth grade. I went back to school and they picked on me, and I hit them. They said, ‘He’ll fight back,’ so they left me alone.”

For the next two decades, Dorsey fought back still, earning the nickname “The Destroyer” for his aggressive style in the boxing ring. But for the past two decades – nearly – he has taught people how to avoid fighting by teaching them karate, self-discipline and character at his karate studio in downtown Mansfield.

After starting karate lessons in 1974, the scrappy Mansfield native took up kickboxing five years later and within two years had won the Karate International Council of Kickboxing’s United States Featherweight Championship in 1983. In 1987, he bagged the International Sport Karate Association World Bantamweight title.

The championship journey had its roots in 1983, as Dorsey focused his attention on boxing, working with trainer Casey Malone. “A couple of guys I was training with were world champions,” he says.

And Dorsey soon was, too. 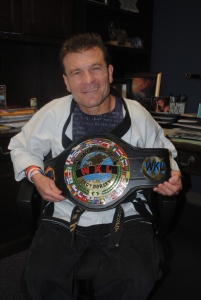 By 1993, he was squaring off against “Golden Boy” Oscar de la Hoya in Las Vegas. But it was Dorsey’s own body that delivered the knockout punch. His sharp brow began to bleed – a recurring problem throughout his career – and the fight was stopped in the first round.

“I was so mad,” he recalls. “I got a two-inch gash over my left eye. While I was getting sewn up in the emergency room, they told me about getting my brow bones shaved.”

So he did, in an effort to stop the bleeding. But Dorsey’s boxing career was on its last legs. “I put my poor wife and parents through a lot,” he says. “I got cut a lot, got busted up a lot.”

Dorsey retired in 1998 and headed home to Mansfield, opening Troy Dorsey Karate & Fitness a year later inside the old Western Auto store at 115 N. Main St. His father, Warren, did all the remodeling.

His mission was to teach karate, but also respect, self-control, good citizenship and responsibility. For almost 18 years, Dorsey has preached those principals to close to 4,000 students. He still teaches 15 to 20 classes with more than 200 current students.

Despite his world titles and aggressive reputation in the ring, even his smallest students don’t worry about taking him on.

“She thinks he’s a very nice man,” Monica Crust of Mansfield says of her daughter Merry, 8. “She’s not intimidated by him at all. She thinks he knows his stuff and he’s funny.”

Dorsey’s reputation now is of a Christian man, says Christine Moreau of Arlington, whose son, Noah, 9, has been taking karate lessons at Dorsey’s studio for the past three years.

“I think the kids have a lot of respect for him,” she says. “They’ll go home and YouTube some of his matches.”
Dorsey is still winning respect. Last year, he earned his ninth degree black belt and was inducted into the World Kickboxing League Hall of Fame. 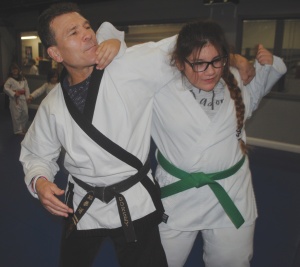 For Anthony Escobedo, 22, of Arlington, Dorsey is remarkable for his accomplishments outside the ring. Escobedo started taking karate lessons when he was 7 years old.

“I remember the first day I walked in here,” he says. “He had a huge smile and said hello. I remember that. It set an awesome vibe.”

Escobedo now teaches at the studio, where his younger brother and sister recently earned their own black belts. “I see him as a father figure,” he says. “I don’t see him as a famous person.”

So Escobedo says it’s kind of a surprise when people walk up and ask for Dorsey’s autograph. These days Dorsey is known more for spreading the word of God than for throwing a punch.

“Most schools hesitate to talk about Jesus,” Escobedo says. “He doesn’t. I think that’s a bonus. He’s definitely a man you want to have in your life. He will always be there for you.”