by ArlingtonToday Magazine
in Arlington News, Business and Education, Featured
0 0
0 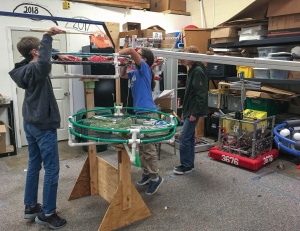 If at first you don’t succeed (supremely), try, try again!

That is exactly what a group of North Texas high school students is doing. The Martin Warrior Robotics team is again participating in the annual Boosting Engineering, Science and Technology, or BEST, Robotics competition in Frisco.

The team won second place in the 2017 State University Interscholastic League tournament and is eager to bring home the state title this month.

“After last year’s performance, the team realized its true potential and now has a more competitive approach,” says sophomore Ben Kocurek. “The team is also comprised of many more freshman this year, which provides the team with a renewed perspective.”

There are 53 students on this year’s Warrior Robotics team. They have had six weeks to design, build and program a robot able to perform specific tasks related to an industry theme.

The 2018 theme is “Current Events,” which centers around ocean cleanup and recycling. It’s an issue that has reached a critical level – eight million tons of plastic wind up in our oceans each year, threatening marine life and the food chain it supports.

In fact, experts estimate that by the year 2050 the amount of plastic in the oceans will outweigh all the world’s fish.

Much of this garbage is collecting in naturally occurring whirlpools called gyres. The gyres are difficult and dangerous to reach, which is why the best competitors are being tasked with building a robot to do the job.

According to Vanessa Rusher, the team’s Outreach Director, this year’s competition is more challenging than the last. “Instead of being on the ground, our robot is mounted on a couple of 2x4s that are hanging at an incline six feet in the air,” explains Rusher. “Before the three-minute run starts, the robot has to be in a two-foot cube. The gyres are about three and a half feet out, which poses an issue as the robot has to reach relatively far out from its base.”

The students reached out to Arlington’s Recycling and Stormwater Departments, as well as to local sustainability groups, engineers and the city’s waste management and recycling vendors for guidance.

The preparation for the competition is intense. Students invest a lot of time, including many after school hours. “The hardest thing during the competition season is maintaining a regular schedule of practicing and improving our techniques for the state competition,” says sophomore Isaac Kelly.

In addition to robotics, the team will be judged in four other categories: oral presentation, education display, project engineering notebook and spirit and sportsmanship.

That sense of teamwork and sportsmanship starts in the Warriors Robotics lab.

“It offers unique opportunities to everyone, regardless of their fields of interest,” says Kelly.

Throughout the season, the robotics team delivers STEM-centered presentations to schools and community groups.