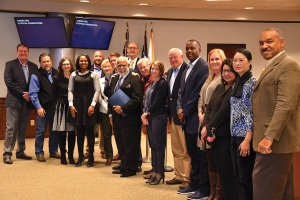 In a December ceremony at City Hall, Mayor Jeff Williams acknowledged the role of a consummate professional specializing in service to others. The tribute to Norm Lyons was attended by a large group of his friends and co-workers who were there to share in the celebration of a day dedicated in his honor.
I first had the privilege of working with Norm when the Texas Rangers Baseball Club named him an executive officer to the organization to manage an important aspect of building The Ballpark in Arlington in 1991.
During the campaign to seek voter approval for the new ballpark, there was a lot of interest in the economic opportunity for local, small, and minority-owned businesses to participate in its construction. Rangers officials promised a pro-active approach to ensure that qualified contractors would have access to the work ranging across the spectrum of all that would be required to complete a world-class baseball park.
In order to organize that effort, Tom Schieffer, the member of the team’s ownership group who was in charge of the project, convinced Norm to take on that assignment and ensure the desired outcome.
During the ensuing 24-month construction period, Norm successfully carried out that mission and was then promoted to the highest team office held by an African-American executive among all of the Major League Baseball clubs in the country.
Among his duties in his new role was to organize the Texas Rangers Baseball Foundation, the non-profit entity of the club that would become Arlington’s premier corporate supporter of community service and charitable organizations and a commitment to improve the lives of children.
When I retired from the mayor’s office, the Rangers designed a scholarship program in my name to reward students from each of Arlington’s high schools who had demonstrated leadership potential. The plan was to involve these promising young people in a rotating internship program through the community’s business, political and service organizations to further develop their desire to better themselves and others.
Students chosen for the program would also receive $10,000 to help with their college expenses. The Rangers committed to do this for 20 years and authorized more than one million dollars to fund the scholarships. Norm helped design that program and became a key member of the selection committee and a mentor to the students, and he faithfully followed their development beyond their high school graduation.
Along with the rest of us involved in the program, Norm routinely flashes a big smile when we witness how many of them have exceeded all expectations and are today changing the world.
When he retired from the Rangers organization, he took on a part time role as Arlington’s Community Relations Coordinator and, as the Mayor’s proclamation cited, “worked tirelessly to spread the Kindness Initiative to schools, organizations, and citizens in the American Dream City.”
Somehow throughout his busy career he’s managed to find time to serve the Van Cliburn Foundation, the North Texas Food Bank, Southwest Transplant Alliance, the River Legacy Foundation and both the Arlington and Fort Worth Chambers of Commerce.
Among his awards and recognitions are the Trailblazer Award in Fort Worth, the Winn Dixie 1996 Good Citizen of the Year Award, and the 2009 Jim Sundberg Community Achievement Award for significant contributions to the community.
Beyond all of that, on a personal note, he’s a great friend of mine and of my wife, and we are pleased to be part of the chorus of many others who are really glad that Norm Lyons came our way.

Richard Greene served as Arlington’s mayor from 1987-1997, was appointed by President George W. Bush as Regional
Administrator to the EPA, and currently teaches in the University of Texas at Arlington’s graduate program in the College of Architecture, Planning and Public Affairs.