This car is all about family

by Richard Greene
in Community, People
0 0
0

From a modest beginning to its transformation into a classic car, this 1970 Mustang has been part of a fascinating family tale.

Charles Paph decided in 1969 that the Ford Motor Company had made the best Mustang ever when he discovered the Boss 302 that had arrived in dealers’ showrooms that year.

As much as he would have liked to have one then, it was a family car he was needing at the time. But he never stopped wanting one of the high-performance vehicles that could accelerate from zero to 60 mph in 6.9 seconds. That appealed to his love for drag racing that had begun when he was in college in the early 1960s.

Old desires don’t fade away easily, and by the mid 1980s Charles’ search for the car of his dreams had finally ended when he located a 1970 model for sale in his home state of Kansas. All the original elements, in spite of some considerable rust that came from operating the car in cold weather, were intact.

He struck a deal, towed the car to his garage, where he stored it until 2004 and then set out on a long journey to restore it to its original glory.

As you can see from the “before” photo on the next page, there was a lot of work to be accomplished, but, with his civil engineering background and a determination to restore it perfectly, he did it all himself. The only exception was the exterior work that was assisted by a friend, a paint and body man retired from Chrysler Motor Company. 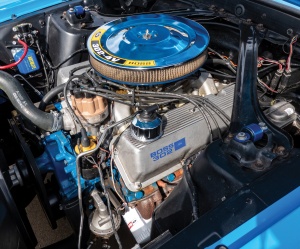 Recalling his discovery of the new Boss in 1969 in a Wichita dealership, Charles later identified his car as being the same one he had seen there based on the Marti Report from Ford’s database he had obtained in 2008. As dramatic as the car was, his memory of it was indelible. He was able to obtain its original windshield sticker and everything matched.

Before his passing, Charles gave the Boss to his daughter, Tina Brown, who resides with her husband Kevin in Mansfield. But, there was a stipulation that it would be handed down to their son, Eric, making the car a three-generation heirloom. Tina’s father also owned a 1957 Thunderbird, which the Browns have now, and it will belong to their daughter Hillary, as directed by her grandfather.

“That makes us caretakers,” Tina says, “but we love sharing them both as we cruise around town and participate in car shows where both vehicles always attract a lot of attention.”

This car would be a welcome participant in this month’s annual Arlington Yellow Rose Classic Car Show that is celebrating the 50th anniversary of the introduction of the Boss 302 this year. But, Tina expresses some hesitation of having theirs in a three-day event revealing hers and Kevin’s protection of the family’s very special possession.

For their daily driving, both of the Browns have gone old school. Tina, a Ford loyalist, has a first generation 1966 black 289 Mustang. Kevin’s is a 1972 Chevy C-10 pickup. Both vehicles are pictured here and you might think his needs a little work.

“People ask me if I’m going to have it fixed up and repainted.” Kevin’s reply: “Are you kidding? If I did that, no one would notice. It’s one-of-a-kind and perfect just as it is!” 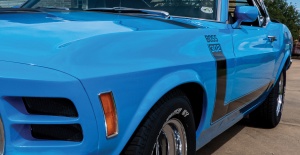 Getting back to the stunning Boss 302, its history with Ford describes how competition brings innovation. The rivalry with Chevy’s Camaro that threatened Ford’s lead in the pony car field was heating up in the late 1960s.

Historians writing for Wikipedia explain that the performance of the Mustangs with lesser engines was not up to the Camaro with its small block and big block V8. In an effort to improve the Mustang’s image, Ford introduced, among others, the Boss 302.

By the time the Brown’s 1970 model came on the market with its “hockey stick” stripes, it sported a revised grille that showed only two headlights instead of the four present on the 1969 model, front disk brakes and a ratchet Hurst shifter navigating the four-speed, manual transmission that kept you banging through the gears one at a time.

The original car was priced at $3,720, and Ford Motor Company sold just over 7,000 of them. Estimates vary on how many are still around, but the one in the Brown’s family is very likely to outlast them all. 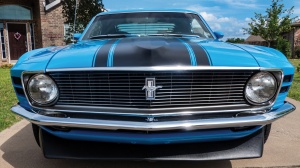