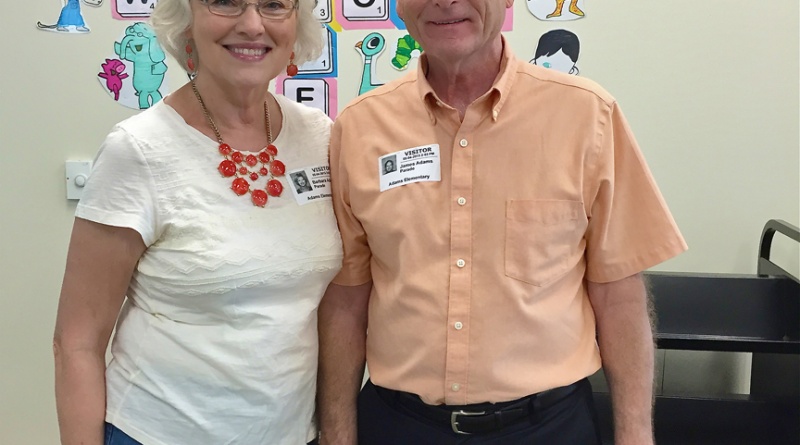 Much to the dismay of sun-kissed children

across North Texas, summer break is coming to an end soon. Teachers, administrators and staff head back to work in mid-August, gearing up for another school year. And in the Arlington Independent School District doors open to all students on the 22nd.

At Adams Elementary, young boys and girls will be greeted by an enthusiastic group of educators, including Barbara and James Adams themselves.

While the couple is retired, they remain very active at the school bearing their name. The Adamses attend performances, book fairs and faculty events, eat lunch with the students and often read to different classes.

“Anytime they’ll invite us we will come,” says James. “Sometimes we come when they don’t invite us!”

Since the east Arlington school opened in 2013,

the couple made a goal to visit at least one time a week. Sometimes they don’t meet that goal, but other times they stop by the school a couple of times in a week.

“We just show up and walk the halls,” says Barbara. “And, you know, if a teacher’s door is closed and everyone is real quiet doing something, we don’t bother them. But if the door is open, we just kind of walk in, and the kids know us, and it’s fun.”

It’s fun for a man and woman who dedicated their lives to helping children. James worked in the AISD for 38 years as a teacher, counselor, assistant principal and finally a principal at Arlington High. He was there for 15 years before retiring in 2008.

Barbara also gave 38 years to the district, spending her time at Hill and Thornton Elementary schools as a sixth grade language arts teacher. Their hard work and dedication was honored a few years ago, when the city’s newest school was named after them.

“A lot of fine educators were nominated because it had been 10 years. So a lot of people that were amazing, that would’ve been great to be honored, were also nominated. But we were very honored to be chosen.”

There are 76 schools in the Arlington ISD. With the exception of Arlington High and the district’s alternative campuses, all of the schools are named after people.

So when the new elementary school was being built,

the process began to name it. Nominations for facility naming are submitted to the School Board for consideration.

“When a District facility is named, it shall be to honor individuals who have made significant contributions to the District and/or whose name shall lend prestige, honor and respect to an institution of learning.”

There are selection criteria that must be met. And members of the School Board make the final decision.

The Adamses remember that night in December 2012.

Bowie Hogg, a former student of James, was the School Board President at the time. He called the Adamses, asking if they were home, and told them they should turn on the television to the School Board meeting. They did. And heard the announcement.

“The building was steel girders,” says Barbara. “And so we buzzed over here the next morning, and we took pictures of the construction. We have construction hats and took tours.” She jokes, “I might’ve given a few tips on how to build the building.”

Although the building design was already in place, the couple did help in choosing the school mascot (Aviators) and colors (blue and orange). Being a former principal, James also recommended that the principal’s office, which was planned to be in the center of the building, be located instead near the front.

Lesley Rhodes was named the principal of Adams Elementary. Per James’ recommendation, she did move her office to the front of the building.

“They just come and just want the best for the people here and for the school,” says Rhodes.

Although Rhodes now has a strong relationship with James and Barbara, she recalls being nervous to meet them. But, she says, that nervousness was short-lived because the Adamses are warm and down-to- earth people.

“What I like about their presence is not just their interaction with the students, but also with the staff members,” Rhodes says. “They go around, making sure to check on each and every one of them in the hallways and things of that nature. So without a doubt, the teachers feel as if they are part of our family.”

The feeling is mutual.

“We are very blessed to be here,” says James. “Great kids, and the faculty here is awesome, too.”

James and Barbara say they are thankful

for how Rhodes made them feel so welcome and so much a part of the school. To this day, James and Barbara say, they get thanked for the school that some think they own. They explain that they didn’t build the school, that it belongs to the district. Still, the two say they get treated like rock stars by parents and students.

“They’ll break out of line and give us hugs,” says Barbara.

Adams Elementary ended this past school year with 875 students, in grades pre-kindergarten through sixth grade. Barbara and James consider each one of the boys and girls their children.

Even a few years after the school opened, “We still drive up and see our name on the wall, and it’s just … it still seems funny,” says James. “It was a fantastic capping to our careers.”

Barbara and James have been married for 50 years. They have two daughters, both of whom are teachers in the AISD. They have seven grandchildren.

And they have a school bearing their name.