We begin this month’s classic car story with a brief review of the nation’s 27th president. Stay with me for a couple of minutes, and I’ll make the connection.

President William Howard Taft, who was elected in 1908 with the endorsement of his famous predecessor, Theodore Roosevelt, is perhaps best known as the only man to serve both as president and later as the chief justice of the Supreme Court. 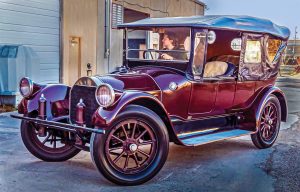 At somewhere near 350 pounds, Taft is the largest man to hold the office of president, and stories still abound about him requiring a giant bathtub to hold his expansive frame.

But he also was the first president to acquire a “motor car” for use by America’s chief executive. Actually, he acquired two of them – stellar Pierce Arrow automobiles very much like the one featured here.

Taft was an enthusiast of the new mode of transportation that, by the time of his inauguration that he attended in a horse-drawn carriage, had been made available to the masses by Henry Ford’s introduction of the Model T. 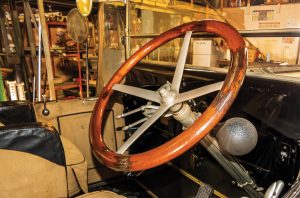 So, he convinced Congress to appropriate $12,000 for the purchase of the two vehicles. But that decision was not without opposition from some “heated protests,” as reported by the White House Historical Association.

Democratic Representative Thetus Sims of Tennessee summed up the resistance, proclaiming the motor car as “a dangerous means of travel, not only for the people who ride in it but for pedestrians. The automobile is a genuine, all-around nuisance. I am opposed to this Congress going on record favoring automobiles as a means of travel.”

Further details cited by the Association include reports of the Washington Post publishing a feature on the cars, revealing the huge seven-passenger, 40-horsepower touring car driven by Taft’s chauffeur and the second one for First Lady Helen Taft’s use. 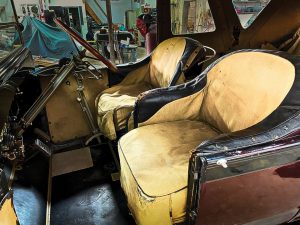 The automobile industry had gained a dream spokesman – the President of the United States. By the end of 1913, America had produced 1,258,060 automobiles, leading the White House Historical Association to conclude that the industry had become “symbolic of progress and the means to expand trade, tourism, and a greater unity of the states.”

With that brief summary of the role of the Pierce Arrows in American history, it’s easy to understand the popularity of today’s classic car collectors acquiring and protecting this remarkable example of automotive antiquity.

Automobile mechanic and technician Robert Massengale is featured here with this one on which he is doing a “preservation restoration,” maintaining as much of its original condition as possible as assigned to him by its owner.

“I’m just doing a freshen up of components like the water pump, oil pump, and making sure all the mechanical parts are functioning well,” Robert says. “The objective is to preserve the originality of the car.”

The photographs of work in progress reveal his success, as this car, now past its 100th anniversary, is true in every detail to its production out of the Buffalo, N.Y., assembly plant.

It’s originality ranges from the wooden spoke wheels to the leather seats that were first occupied by a chauffeur and as many as six passengers. Robert explains: “The reason the car is so tall and wide is to accommodate the formally attired occupants and the tall hats and headdress of both men and women of the era.”

The end of the line for Pierce Arrow came in 1938 in the worst of the Great Depression years. The company did not produce a lower-priced car to remain competitive but, instead, remained true to its storied commitment to quality as described in its advertising:

“The Pierce-Arrow is designed and built to meet every requirement of the discriminating motor car buyer. It embodies the best materials money can buy – the most approved types of mechanism, and workmanship that commands world-wide admiration. It is accepted everywhere as America’s foremost motor car.”

A claim, it would seem, confirmed by the first of our presidents to have one.