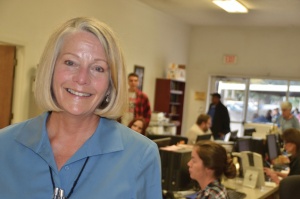 One morning a bearded man in tattered jeans and a faded Cincinnati Bengals hoodie stood stoically at the corner of South and Oak streets. He lingered there, as if paralyzed, or confused, or in some deep contemplation.
Said his name was Charles. Just Charles. Said he grew up in Ohio and came to Dallas to live with a brother who was shot to death in a card game gone wrong. Said his brother’s wife, feeling insecure with his presence, asked him to leave sooner than later, so he did, with $400 and his brother’s motorcycle.
Once the $400 was gone and the motorcycle broke down, he lived “the best way I could,” which meant outdoors. No roof. No food.
This corner is a popular one for people like Charles because it’s a few feet from Mission Arlington, perhaps the most readily identifiable brand in the city. Ask someone about this non-profit organization, and they can probably tell you what it is and where it is (210 W. South St.).
For some, Mission Arlington was their first foray into volunteerism. Few non-profits have such a headlock on the giving hearts of supporters, whether it is civic organization, school, business, family or individuals.
As Executive Director Tillie Burgin put it, “if you can give us 30 minutes, we’ll take the 30 minutes.”
For Charles, this is about receiving, not giving. That’s fine for Mission Arlington, whose medical and dental clinics just last year doled out well over $2 million in free care and medication to about 6,000 people. Its famed Christmas store helps roughly 30,000 people a year; 25,000 or so are on their Thanksgiving meal list, and another 9,000 children pick up free school supplies.
Burgin is the first to say how Mission Arlington is made up “of many moving parts” that include some 2,500 volunteers. While no one volunteer is more vital than another, it is clear that not all of them can be – or wants to be – in what’s called “the Front Room.” That’s the room you first see when entering the place, where chairs are lined up and bodies are always in them. Well over 200 families file through here each day, six days a week – more at this time of year. Front Room volunteers are the laborers of the high-end crisis, the people who sit with those in need to find out what’s going on in their lives and what can they do to help.
Death, loss, homelessness, bad health, violence, abuse – it comes with a face, often solemn, often desperate. That’s not easy to psychologically digest, especially.
Which is why Burgin says The Front Room “is not for everybody.”
“The front room can be a very emotional and sometimes difficult place to be depending on what people need,” says Leila Magill, who knows. She’s a 14-year volunteer, all in the Front Room. “The stories are not always good.”
When volunteers want out of the Front Room, it’s understood why. “Sometimes,” Magill says, “it’s tough to deal with some of the emotional issues we face in trying to figure out how to help someone who has come in.”
Magill’s longevity is a testament to her God-given calling. “I’m here by the grace of God,” she says pointedly. “He brings me here two days a week. It’s just my kingdom work. He keeps me faithful. So I have no one to thank but Him.”
Both Burgin and Magill say how wonderful it would be if Mission Arlington were no longer needed for people like Charles, who eventually stepped inside the Front Room.
“You pray for that. You hope for that,” Magill says. “But the reality is we open the doors, and people keep coming through. As long as they come, we’ll be here to help them.”