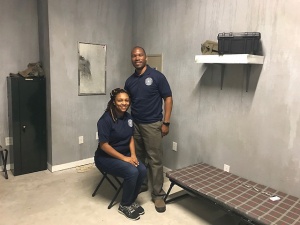 Tucked discreetly away inside an inconspicuous building in North Arlington is Blue Ops Mission – an escape room that looks to be part of covert government operation.

But what exactly might one escape from – zombies, a deadly virus or an influx of steroid-consuming, sewer rats?

“Our goal, Blue Ops Mission, is just come here and do some missions and not escape anything,” owner Elijah Clark says. “It’s not really escape.”

It is really fun – and part of a new form of entertainment that draws clue-based game lovers to 351 W. Randoll Mill Road, Suite 131 on a growing basis.

Clark, a military veteran with a background in marketing, along with his wife, Anastasia, launched Blue Ops Mission a few months ago. They say their biggest hurdle has been getting people to realize what escape rooms are all about. At this one, guests can choose from three rooms inside the building, from which “not to escape.” During an hour-long session, players are provided clues to decipher codes that lead to more clues and ultimately to the end of their mission.

“We try to throw a unique approach which is CIA, FBI, military,” Clark says.

From Blue Ops Missions’ governmental color scheme to its official badge-type wall insignias, the themes are apparent. One room is set up with authentic, military-grade gear and features a reconnaissance mission. Clark says it’s the operation’s most challenging room.

There’s also a captured comrade POW room whose drab surroundings, which includes a relief bucket placed in a corner and not much else, and isn’t a place anyone would want to spend much time in. It is also the least complex of the three missions.

The most popular challenge is Mission Blue List, which is sort of a throwback to National Treasure where players try to find a list of names hidden somewhere inside an office.

I tried Mission Blue List and realized – at one point, while sitting cross-legged on the floor hunkered underneath a desk trying to crack a combination lock code – that it was fun.

The place gets a lot of Generation Xers, Clark says. And while most, including myself, don’t complete their mission successfully, since prizes are involved, if someone shows up with children their mission will more than likely end successfully.

“Math majors get out pretty fast compared to those who don’t know what they are doing,” Clark says. “Usually, we help people out a little bit with clues.”

Clark pointed out a room filled with television screens where activities taking place within the rooms are monitored and where parents can sit and monitor their children’s adventures. In addition to the (non)- escape rooms, Blue Ops Mission also has a conference room that is open to the public and serves as a corporate meeting and event space.

Clark also says he and Anastasia knew that Arlington was where they wanted to be.
“You go over it in an airplane, and you just feel it,” he says. “We tried to make our place the place to go. [And] we get a lot of families.”