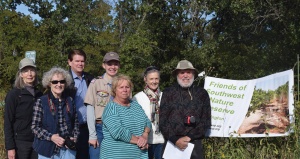 A diverse crowd of biologists, botanists, herpetologists, master naturalists, an artist, photographers, and citizens who just appreciate the naturally wild topography of Arlington’s Southwest Nature Preserve gathered to celebrate its fourth anniversary on Oct. 28.
The preserve is the fourth and largest Arlington park to be kept as a natural area (others are the O.S. Gray Natural Area, the Blackland Prairie Park and Crystal Canyon Natural Area). But the heavily wooded, 60-acre property almost became a residential housing development in 2004. The City of Arlington saw its potential as a wildscape and partnered with The Trust for Public Land, which purchased the property in 2005 and held it until the city could arrange funding.
The celebration was hosted by the volunteer organization, Friends of the Southwest Nature Preserve, who keep a watchful eye to preserve the site through invasive exotic plant management, aquatic habitat restoration, and trail development and management. They also offer monthly educational programs.
The day began with a Bird ID Workshop, a quarterly event at the preserve, and included a hike to the sandstone bluff atop its Kennedale Mountain that has a panoramic view of downtown Fort Worth. Fly fishing demonstrations, exhibits of dragonflies and aquatic life were presented on the pier of one of its four ponds that includes a terraced outdoor seating and education area.
The preserve is a remnant of the Eastern Cross Timbers habitat, and has some 300 native plant species, including the endemic Glen Rose yucca and the farkleberry tree. An array of mammals and birds live on the preserve, including herons and foxes.
The Friends also debuted the preserve’s latest addition – two acres of newly turned sod on its southwest corner that will be dedicated to creating grasslands consistent with the Eastern Cross Timbers Eco-Region (the geographic strip of land that forms part of the boundary between the more heavily forested eastern part of the country and the almost treeless plains).
During the event, participants sowed white tridens native grass in the area that will be native pollinator friendly and a virtual outdoor classroom. Thanks to Eagle Scout candidate David White, the preserve also debuted a new trail-head kiosk and trail signage. White volunteered to enhance its trail system with interpretive signage about the preserve’s natural features and strategic placement of color-coded markers along the trails that will make them easier to find and navigate. The kiosk will offer free educational materials, including natural history information and online links for reporting wildlife sightings and species ID.
White and his fellow scouts worked on the design and partnered with Arlington Parks and Recreation on the construction. The project will help guests to have a more enjoyable experience and greater appreciation of the preserve while also establishing easily recognized trails and reducing erosion and its damaging effects on wildlife habitat, Friends members say.
“We are very fortunate to have this preserve that is so rich in natural and human history,” says Friends member Jan Miller.
Friends member Laura Capik counts “being able to restore one of the preserve’s major trails by recreating the switchbacks and regaining what had become an erosion trail” as two significant accomplishments during the past four years. “Applying for grants to help the parks department with projects in the preserve has also been a major step,” she says.
For more, visit swnp.org or the preserve’s Facebook page. The Southwest Nature Preserve is located at 5201 Bowman Springs Road in Arlington. Hours are 5 a.m. to 10 p.m. More info is also on the Arlington Parks and Recreation website, naturallyfun.org.