The origins of Globe Life Field

If you look at the timeline from ground breaking to the completion of the Texas Rangers new ballpark, it appears to have unfolded over the past 32 months.

It actually began some 56 years ago.

I was reminded of this reality in a recent discussion with Al Rollins who served as Arlington’s city engineer, director of public works, director of utilities, city planner, all before becoming the city manager in a time span from 1956 to 1967.

Those were Arlington’s formative years in what we mark as the beginning of the city’s modern history.

General Motors had rolled off the first of the big car maker’s products in their new plant on the Southeast edge of the city. Residents were getting their drinking water from the new Lake Arlington following a contentious election to fund the lake that ensured the city’s rapid expansion.

An effort by Dallas and Fort Worth leaders to convince Major League Baseball to grant a new franchise for the area had ended when MLB owners had rejected the proposal that included the promise of an enclosed, air-conditioned domed stadium.

As former city manager Rollins explained, that failure wouldn’t be the end of the dream of professional baseball for Arlington.

Tarrant County Commissioner (who would become Judge)  Howard Green was helping lead the development of a Fort Worth convention center. Al’s account: “He approached Tommy (those who served with Vandergriff still call him that) to secure his support for the bond election that was to be held to fund the new center.

“Tommy asked Howard, ‘Why should I do that? What’s in it for Arlington? If you are looking for our help, there’s something we want,’ and a deal was struck.

“The bond election was expanded to include funding for what was to become Turnpike Stadium and potentially host a minor league team.”

That election was held in 1964, and a majority of voters said “yes” to a proposal for a publicly funded ballpark. They would come back six years later and approve $10 million of new dollars to expand the little stadium and, importantly in years to come, acquire 132 surrounding acres for future development.

That makes twice even before the Rangers arrived in 1972 that voters had authorized tax money to support the city’s emergence as a Major League City. 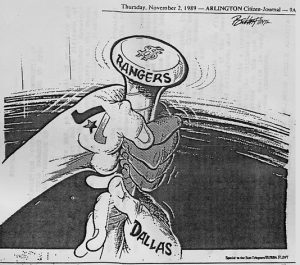 Notwithstanding its many transformations, Arlington Stadium, as it had been renamed, would prove inadequate to support the growing cost of running a major league baseball team through the decade of the 1980s and beyond.

When new owners acquired the team in 1989, headlines blazed in the two Dallas newspapers with stories about how the Rangers would be moving there because a new ballpark would be required and only Dallas could handle such a project.

Dallas television stations would add to the “certainty” of the Rangers relocation. The coverage was accompanied by maps showing three Downtown Dallas sites where a new ballpark could be built and still another speculated in Irving near the Cowboy’s Stadium.

It wouldn’t be the first time Arlington and its can-do spirit would be woefully underestimated.

Following an aggressive plan to convince the new Rangers owners of the city’s capacity to meet the team’s needs, voters showed up in record numbers for a special election in January, 1991. They overwhelmingly approved a half-cent sales tax to support the city’s partnership with the team to provide its portion of the cost to build The Ballpark in Arlington.

Twenty-five years later with the need to provide players and fans alike relief from the oppressive summer heat, voters for the fourth time in the city’s history of supporting professional baseball said yes to the development of Globe Life Field.

Arlington will celebrate its 50th anniversary as a Major League City in less than two years, and now you know, thanks to the recollections of former City Manager Al Rollins, how it all began.