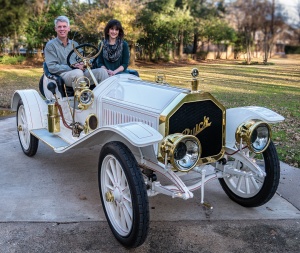 Aaron and Rick Logsdon seem all set to reprise the experience of her great-great-grandparents, along with her great-grandmother and great-aunt, teenage girls at the time, who traveled a 2,000-mile round trip from Kansas City to Corpus Christi in 1912. The difference, however, was their journey was made in a EMF Touring Car with a top and room for five, while this 1910 Buick Model 16 Roadster was designed for an entirely different buyer in the early era of the horseless carriage. 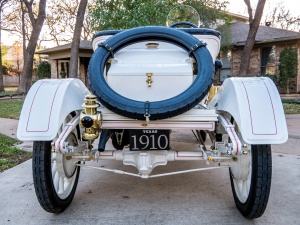 This beautiful example is all about things mechanical, as the driver is constantly engaged with the non-synchromesh changing of gears, manual spark advance control, hand throttle, no mirrors, no signals, mechanical brakes and sensitive steering.
And, without a windshield, the occupants of the two-seater had to be dressed appropriately for the impact of headwinds created by the speed of the big, 318-cubic-inch, inline four-cylinder engine producing a ride of 65 MPH.

The Buick belongs to Aaron’s father, Arlington classic car collector Mike Ames and his wife Joy. It was her great grandparents who made that 2,000-mile journey in 1912. Mike explains its place in early American automotive history: “This car was the basis for the famous Buick ‘Bugs’ that were driven by renowned race driver Louis Chevrolet to an impressive array of victories and a record-setting 106 MPH time trial. These were very fast cars, and, just like today, winning races on Sunday created showroom traffic on Monday.” 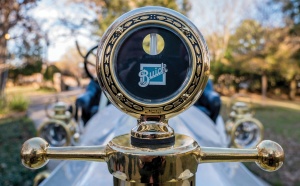 Having just acquired his first vehicle from the beginning of the last century to join his collection that spans the decades up through the 1970’s, Mike has fulfilled a long-sought goal.

“My personal search started years ago with a desire to add a car over 100 years old to my collection,” he says. “The architecture or styling of the automobile is fascinating to me. This car represents the earliest example of car proportions that endure to this day – particularly sports cars – long hood, short rear deck, and just two seats. It just looks fast, not like a buggy without the horse. I enjoy the history of automobile evolution, and this car is a beautiful example of early styling.” 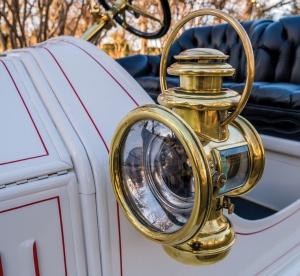 The 1910 model year is generally considered part of the Edwardian or Brass Era that ran from 1905 to 1918. These cars were very ornate with an abundance of highly polished brass hardware items including the radiator, lights, horn, controls, hubcaps and fasteners. The brass required constant attention and care to maintain its brilliance. The more expensive the car, the more brass ornamentation. Most people that could afford Big Brass Cars could also afford a chauffeur whose duties included not only driving, but keeping the brass looking great.
This was followed by the Vintage Era that switched from brass to nickel plating and ultimately to the Modern Era when chrome plating was adopted – and remains the bright metal of choice.
Buick was the second largest manufacturer in the U. S. in 1910, producing a total of 29,425 cars. Only 153 were Model 16 Roadsters of which maybe as few as five remain today.

You would need to come up with $1,750 to acquire one the year it was first available. That translates to about $44,000 in today’s dollars, but, still, you would be buying a car without a roof, windows, doors, seat belts or anything to hold on to in the ruts that defined many of America’s early roads. 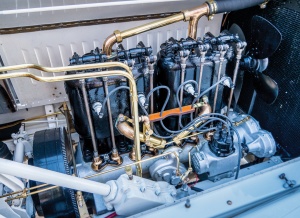